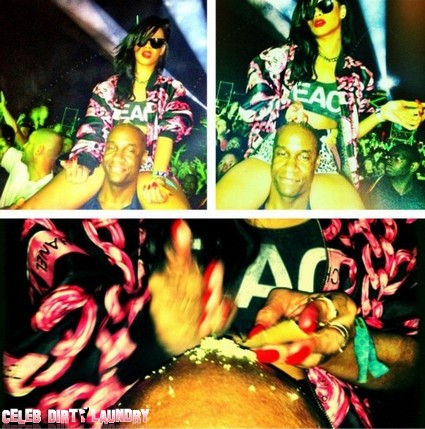 It’s no secret that Rihanna enjoys her bad girl image and revels in shocking her fans with her irreverent behavior.  Those close to the songstress fear that her carefree and at times careless behavior will lead to a tragic end.

According to the British newspaper, The Sun, Rihanna’s father, Ronald Fenty, reveals that from a young age she was obsessed with Whitney Houston, the oft troubled diva who lived a life destroyed by drugs and died a tragic drug-induced death back in February.

It’s true that Rihanna’s recent wild behavior has led to numerous comparisons to Whitney Houston in the press and her recent controversy at Coachella really started a firestorm.  As CDL previously reported, Rihanna was photographed sitting on her handler’s shoulders and she appeared to be doing cocaine off the top of his head.  At least that was what she wanted us to think… how clever.

In typical fashion, Rihanna took to her Twitter to address the drama in a typically unapologetic manner: “I’m crazy and I don’t pretend to be anything else.”

There are in fact many similarities, both good and bad, between Rihanna and Houston.  Both started off singing in church, both have attached themselves to notorious bad boys and both have been rumored to have had lesbian partners.  Rihanna is also transitioning from singing to acting, with her upcoming role in Battleship.

The eerie similarities are leading to widespread speculation that Rihanna could portray Houston on the big screen.  Rihanna herself has said the following:

“If I was going to do a biopic, it would have to be someone I admire and she is definitely one of those.”

“That would be something I would have to give my entire life to do because I would want to really pull it off.”

Houston’s friend Malik Pointer commented on the similarities of both singers:

“Rihanna is basically Whitney 2.0. That kind of talent only comes around every 20 years or so.  They sing like angels and they have faces of angels — so even without the talent they would have people eating out of their hands.”

“We’re talking about two of the greatest talents in the history of female vocalists. Add to that addiction, or at least a love of partying, and it’s a recipe for disaster.”

“Rihanna is a wild child. She has the voice of an angel but she can get down and dirty. But she has youth on her side. There’s a chance she’s just getting it out of her system and she’ll find the right guy and settle down by the time she’s 30.”

Rihanna’s father believes his daughter would grab the part if it was offered to her:

“She used to love Whitney. Robyn would always sing along to I Will Always Love You.”

“She admired Whitney because of her range, her voice, her appearance, her personality — everything. She loved Whitney so much she would be honored to play her. I think she would accept in a heartbeat.”

Fenty hopes his daughter is smart enough not to end up like her mentor –with a life cut short.  Do you think Rihanna is just blowing off steam and enjoying her youth or do you think beneath all the fun lies a real burgeoning problem for the starlet?  Tell us in the comments below.