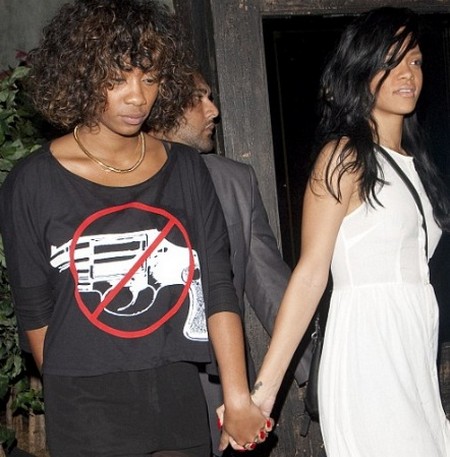 Rihanna appears to have gone for a same sex hookup with Melissa Forde on her ‘first date in almost 2 years.’  Apparently ‘date’ has a special lesbian connotation for Rihanna since she has clearly been on a whole bunch of conventional dates recently – from Ashton Kutcher to Meek Mill with a little A$AP Rocky thrown in for good measure.

Rihanna tweeted ‘I’m on my first date in almost 2 yearz,’ last night and then revealed that her date was female friend Melissa – and the date was anything but platonic. Rihanna and Melissa had a hot time, holding hands over dinner at Malibu’s Giorgio Baldi and then zooming off to the Roxbury nightclub in Hollywood

Rihanna loves attention and controversy and so continued to use Twitter during the date to let us all know just how cool she is… and how hot!  It doesn’t take much to see what Rihanna was trying to communicate in her tweets.

‘Beautiful is great, submissive is even better. Bawse b***h who’s submissive yet the captain of the ship n HONEST…#priceless #marryME,’ she tweeted.  Following it up with: ‘But she bad… So maybe she won’t…. But s**t, then again maybe she will.’

Rihanna uploading photos to her Twitter account of her table at the club covered in bottles of booze.  One upload had a photo of her and Forde with the caption: ‘#datenight my lover for the night.’  Interestingly, one of Melissa’s Twitter followers is Chris Brown… was Rihanna trying to make Chris jealous?

So is Rihanna a woman for all seasons?  Do you care? Why does Rihanna need to broadcast her business to the world?   Oh right, I remember now, the celebs get paid BIG MONEY by Twitter.  What do you think of all this?  Let us know in the comments below.