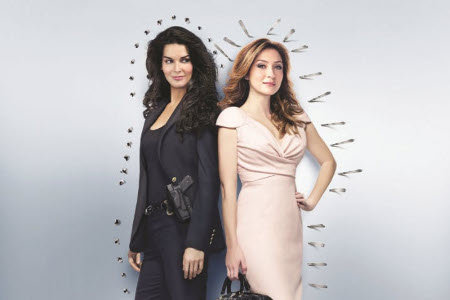 Rizzoli & Isles is one of the hottest crime dramas on television right now, and with season 3 moving forward with full force, we figured now would be as good of a time as ever to help get you caught up! The show features the crime-fighting happenings of Detective Jane Rizzoli (Angie Harmon) and Dr. Maura Isles (Sasha Alexander) in the tumultuous heart of Boston. Angie Harmon and Sasha Alexander have great on screen chemistry, which translates into a wonderful and dynamic relationship between the free-spirited Jane and the obsessive-but-warmhearted Dr. Isles. It’s one of those shows that contains all the necessary ingredients: humor, drama, a little romance, and a lot of good ol’ fashioned hardboiled cop drama. So if you’re not familiar with the show and are eager to jump right into the series, check out what happened on last season’s finale! The story’s getting good, folks . . . you won’t want to miss this show.

Last season on Rizzoli & Isles there was a giant factory fire, which resulted in the rather violent death of a firefighter, and, naturally, we saw Rizzoli and Isles assert their dynamic crime fighting skills to solve the mystery. The factory that blew up belonged to a man by the name of Mr. Whistler, and Dr. Maura Isles, who never fails to impress me with her unbelievable wit, began to think that it was arsen.

On the lighter side of things, Agent Dean and Rizzoli’s romantic life began to blossom, and Maura explored the relationship with her mother. However, as Dean and Rizzoli prepared for an intimate night in (dinner, swanky dresses, the works), Maura and her Mother get hit by a car — in a quite violent hit and run. Maura walks away from the site unscathed, but her mother isn’t so lucky and, unfortunately, winds up in the hospital in critical condition.

Rizzoli, while Maura dealt with both the physical and emotional traumas of the accident, investigated the crash and determined that the car’s driver was indeed trying to kill her. At the hospital, in her mother’s room, Mara’s biological father showed up: Boston mobster Patty Doyle. Dr. Isles confided in Rizzoli — told her all about her father’s return — and Rizzoli, while trying to protect her friend and uphold her professional responsibilities, understood that, at some point, they’d have to lock Patty up. But she also values Mara’s life and, naturally, wanted to protect her best friend . . . so they allowed him to “slide by,” fully knowing that he would do everything in his power to protect his daughter, quite easily the love of his life.

Eventually, they found the car that ran over Dr. Isles. Dr. Isles accompanied them to the forensic examination, and she struggled emotionally as she realized that that the car nearly ended her life.

Back at the hospital, Dr. Isles’s mother wakes up and Patty, who was there by her side all the while, left before he was noticed by her.

Eventually they found something that connected the driver of that car to the fire that was started at the factory. Dr. Isles and her super smarty-pants brain, discovered that the reason why the firefighter spontaneously combusted was because someone coated his face shield and gloves in potassium permanganate. And when mixed with glycerol, a common ingredient found in cough syrup (which Rizzoli found trace elements of in the car), results in a nasty explosion.

It didn’t take this dynamic duo long to figure out that the fires were started deliberately. The team devised a plan and put Dr. Isles under cover, sending her back into the original factory that burned down, hoping the firestarter would get nervous and show himself. They were (please excuse this pun) trying to smoke him out.

Dr. Isles runs into the arsen and he admits that, due to the city’s laying off of firefighters, started staging fires to prove to the community what an asset they are. He’s about to kill her when our good old Irish mob boss man, Patty Doyle, showed up. Patty shot Maura’s attacker and Rizzoli’s team assembles and . . . shot Patty down. He fell and landed on the ground hard, in what looked to be a fatal accident.

Dr. Isles was, needless to say, furious that Rizzoli let this happen.

At the end of the season finale, we got a feeling that everything wasn’t well between Rizzoli and Isles. And after watching the season 3 premiere, we definitely saw their friendship go through a moment of struggle and immense tension. Everything turned out okay in the long run, but it was refreshing to see their relationship endure a lil’ bit of hell. Now, refreshed and ready to go, who knows what baddies these two will face next. One thing’s for sure: Boston badasses better not mess with Rizzoli and Isles . . . because, with Maura’s brain and Jane’s gun, they don’t let nothin’ stand in their way.

“Based on characters created by best-selling crime novelist Tess Gerritsen, RIZZOLI & ISLES stars Angie Harmon as Jane Rizzoli, a tough-as-nails Boston police detective, and Sasha Alexander as Maura Isles, a smart, impeccably dressed medical examiner from a privileged background. Despite being complete opposites, the two women share an offbeat chemistry and strong working relationship that has helped them bust some of Boston’s most notorious criminals.”

To get fully caught up, check out this season 2 rewind!

Disclosure: Compensation was provided by TNT via Glam Media.  The opinions expressed herein are those of the author and are not indicative of the opinions or positions of TNT.