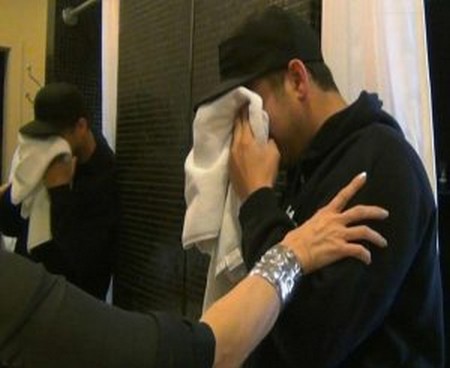 The Kardashian family has been going to therapy on their show Keeping Up with the Kardashians and we find the most unlikely Kardashian crying, son Rob Kardashian – he seems to be having a emotional breakdown. I have to ask though, is it real or it scripted? I vote scripted, so go ahead and yell at me.

If you watched last week’s episode you saw Rob storming out of family therapy after believing his career aspirations were being shotdown by botoxed sister Kim Kardashian. The family frustrated only son felt like the loser of the family. To make matters even worse for the 25 year old his family even suggested an intervention. Why, because he doesn’t whore himself AS MUCH as the rest of his family? In the clip set to air tonight, a sobbing Rob tries to explain his side of the story to sister Khloe Kardashian and their therapist what triggered his implosion. Kim, Kourtney Kardashian and Kris Jenner are in the other room and are giving their own opinions which I’m sure aren’t pretty.

This whole family utterly disgusts me. While I think Rob and Khloe are better than the rest of their crazy, famewhore bunch I can only take so much. If Rob really is upset then why doesn’t he act like a human being and not a cheap reality show slut? I would have the courtesy to ask my family to go to therapy or have a family meeting privately, not airing it for the whole world to know their issues.

But I guess since that’s what they have become famous for I can’t ask too much. I have an inkling that the ridiculous Kardashian bunch are going to be around for a little while longer so Rob better suck it up or be prepared to get upset all the time over his family’s antics. I’m sure Rob doesn’t really want to cry in front of a national audience either.  The family member who should really be crying is poor Bruce Jenner since he married into this clan presumably by choice!  Of course Brucey has so much botox and plastic surgery that he CAN’T cry!!