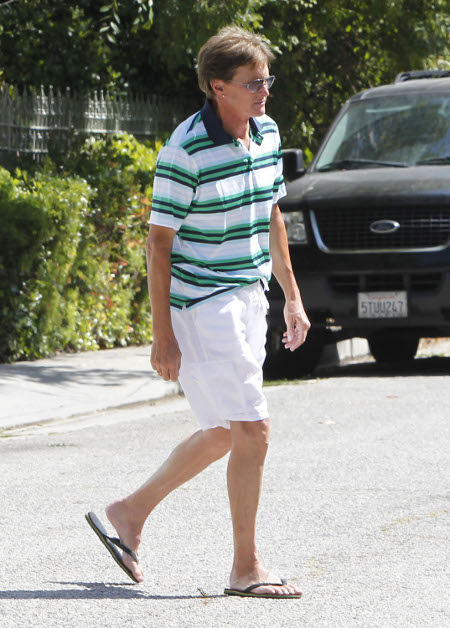 Our favorite creature of the year, the lovely and ignorant Bruce Jenner, recently huffed and puffed at Kim Kardashian about her relationship with Kanye West. According to the National Enquirer, Kim was told by Brucey that she was making a stupid mistake all over again by dating Kanye West.

Look, Kanye isn’t our favorite person on the planet, but this recent vilification of the horrible rapper is a bit too much. Come on Brucey, do you honestly think you have any say over Kim’s life? You’re a blissfully ignorant Kardashian Squarepants who needs to find a freaking pineapple under the sea and stay there.

A family friend says, “Bruce didn’t like Kanye from the start. He thinks he’s crass and disrespectful.” Wow, did Brucey only realize this now? Was he completely detached from his soap opera life when Kanye almost punched Taylor Swift in the mouth at that infamous MTV Awards ceremony? According to The Enquirer, when Kanye told Bruce that his “Perfect Bitch” song was about Kim, Brucey popped open his face from anger.

“He told Kim she’d better take a serious look at all her failed relationships — and figure out why she keeps falling for the wrong type of guy,” reports the source. “Bruce said, ‘You’re never going to be in a successful relationship if you keep going out with men like Kanye!”

Okie dokie, Brucey! Perhaps you should have attempted to stop Kim as she stormed out of your house? Oh, we’re sorry; we completely forgot that you have been living under a rock ever since your once-off record win at the Olympics, back when Eartha Kitt still vibrated on a treadmill.

Let us know in the comments below if you think Bruce is correct in telling his step-daughter off for dating Kanye West.