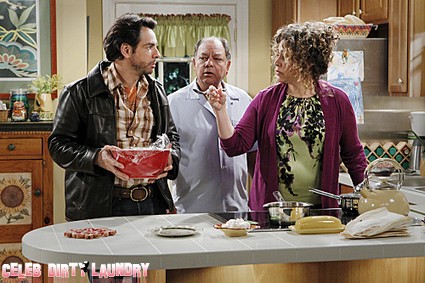 I read a couple of reviews on Rob and to be honest, I wasn’t expecting much because the reviews were not that great.  Surprisingly, I really liked the show, how about you? We recapped it here if you missed it.  I liked the concept of Rob and Maggie eloping in Vegas and don’t you think they have good chemistry? The show was good, the reviews were wrong, don’t you think?

I thought it was really funny when Rob wanted to avoid meeting Maggie’s parents and he told her to text them, isn’t that what everyone tries to get away with nowadays?

I love Maggie’s parents, did you like their roles and how do you think the actors did? I think they did a real good job, I especially liked Cheech Marin, who wouldn’t right? When Fernando told Rob that he hired illegal aliens, I thought Rob was going to hit the floor in shock, being that Fernando is Mexican after all.

So what do you think, is Rob a Landscape Architect or a Gardener? That comment from Maggie’s mom was hilarious.

Cousin Hector was a perfect addition to the show, did you like him? I loved how he pretended to be Rob’s best friend just to get $7,200.00 out of him and how he convinces him to go upstairs and the whole scene with grandma on the bed, did you think it was funny? I thought this was one of the best parts of the show when the candles all fell and grandma comes in the room and Rob pins her to the bed – first class comedy.

What was your favorite part of the show tonight? Will you watch it again? I would, I actually really liked it, all the actors did a good job and I didn’t find Rob’s jokes to be offensive in the least, did you?

Rob’s new BF, Hector, tells him that the whole family hates him, I was proud of Rob for staying strong and didn’t you like when he confessed his love for Maggie to everyone?

Rob turned into a hero, he apologized to everyone and I think he got Maggie’s dad, Fernando on his side. What do you think, will Fernando be on Rob’s side or will he side with his wife and leave Rob with only his new BF, Hector to defend him?