Robert Pattinson And Katy Perry Get ‘Touchy-Feely’ On Dinner Date 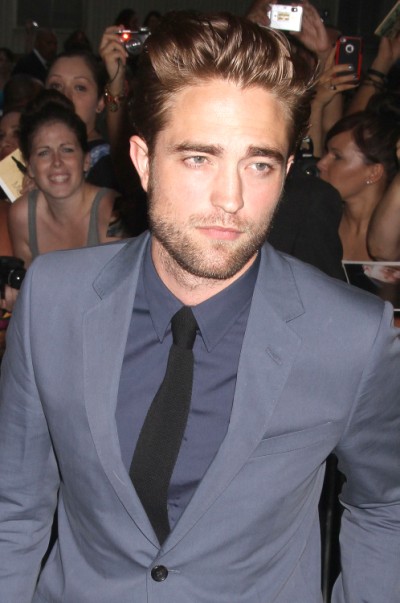 Most details are spilling from the dinner date between Robert Pattinson and his “close friend” Katy Perry. The two recently single and heartbroken hotties were spied at Soho House a week ago and sources claimed at the time they were merely consoling each other through their respective break ups. But it’s looking like they mixed a little pleasure with their business!

A witness told Us Weekly in its September 20, 2012 print edition that Robert, “tried to keep a superlow profile” but Katy was giggling and hanging on his every word. She does have a thing for British dudes…. “She was jokey with him and a little touchy-feely. They were flirting” the source added. SKANK!

Although insiders told the magazine that they were sure Rob and Katy were just commiserating over their unlucky in love statuses, a source said Katy’s ready to bust in on Kristen Stewart’s ex. “Katy would secretly love to land Rob. But she won’t admit it. They’ve been friends for about five years. Rob and Kristen even hung out with Katy a few times.”

Where is the loyalty girls? Seriously! Katy and Kristen have hung out a few times for sure so you’d think Katy would wait longer than a hot minute to encroach on her man. I know, I know, Kristen has no right to balk. But screw that, yes she does! I don’t care if Kristen cheated with Russell Brand, Katy should respect her friend and wait before she makes her move. Call me crazy, but I had no idea Rob was such a hot commodity. I’m not naive to the fact that 13-year-olds and midwestern housewives have a thing for the brooding vamp but Katy Perry? How do you go from Russell to Robert? I just don’t get it!

Do you think Kristen will give Katy a call? I wouldn’t put it past her. Or should Kristen make out with John Mayer to make things square? God, I hope she doesn’t do that. Rupert Sanders was enough. You shouldn’t slum more than once in a year for the sake of  your self esteem if nothing else.

Do you believe Rob would hook up with Katy? What do you think of Katy’s timing? Is she showing her true colors by jumping on Rob’s bandwagon that quickly or is all fair in love and war?