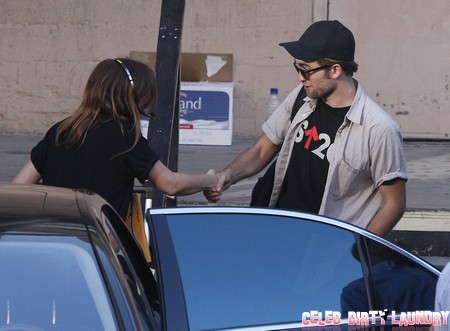 I guess having his heart stomped on once really wasn’t enough for Robert Pattinson. We’ve been hearing reports for the last two weeks that he and his trampire, Kristen Stewart, were working on reconciliation and now it appears that she really has wormed her way back into his life for real.  Instead of living apart, as the couple has since July, it seems that Kristen has indeed moved back into Rob’s palatial Los Feliz home, as a large moving van was spotted outside of it!

Kristen has groveled and whined since the July split, begging Rob to take her back, and for a little while there it looked like the sparkly actor was smart enough to shut the door on her and her trashy behavior. After finding out that his love-in-love was screwing the married Rupert Sanders, he kicked her and her constant scowl to the curb. He also put his Los Feliz home on the market for a reported $6.3 million and looked like he intended to move on without her.

As Kristen was publicly shamed and made fun of, Rob took the high road even in interviews. I kind of respected him for how he dealt with the fallout, especially after being so vocal about his dislike of cheaters in the past. So what the hell happened? How on earth did he decide to cave in and not only take her back, but allow her back into his home?

Rob’s friends are reportedly telling him that he’s making a huge mistake and that Kristen will grow bored with him and roam again. I agree, next time she’ll just be a bit smarter about who she kisses and where!  Are you happy to see them reunited?  Do you think it’ll last more than a little while? Will it last past the Breaking Dawn Part 2 promotional nonsense? Tell us in the comments below!