Robert Pattinson And Kristen Stewart Will Both Appear At MTV VMAs 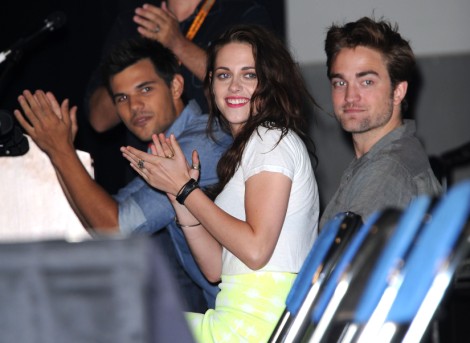 According to Contact Music, Hart said, “From what I understand they’re both still gonna be here. I’m not really up to speed on the whole soap opera that’s been going on between them. I know they’ve got a movie to promote. Twilight’s coming out so it makes sense for them to show up at the VMAs if you ask me. [Although] I don’t really care.”

Right, you don’t care or know anything about it which is why you’re name-dropping them to get people to watch the show.

I didn’t know Kristen could be in two places at once. Kristen’s supposed to be at the Toronto Film Festival where she’s debuting On the Road. The premier is this Thursday – the same day as the VMAs. Did she have a sudden change of heart? Did Rob end the blockade on his love and ask Kristen to rush back into his arms? I highly doubt it. I’m guessing Hart was just trying to get the show some attention since most people don’t even know who he is or that musicians make music videos anymore.

And also the wording is a little funny. I wouldn’t put it past those Twilight producers to OK Kristen’s TIFF appearance if she agreed to make a video or something for the show. So technically Rob and Kristen could be there just via satellite or something pre-taped. Or I could be wrong. Kristen and Rob might have given the show a second thought and decided they owed it to their loyal Twilight fans to show up. What do you think? Is Hart just flapping his gums or does he know something we all don’t about the VMAs? Kristen and Robert can be sneaky! It would be the biggest surprise EVER and win Kristen back some fans!