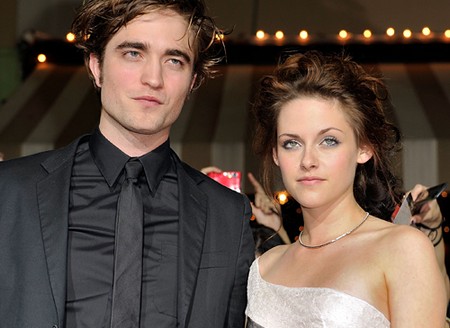 It’s seems as though Robert Pattinson and Kristen Stewart will once again be working together.  Don’t hold your breathe – it won’t be for a Twilight sequel (although I would pay a thousand dollars to see one).

The couple, who have been together for quite some time after meeting on the set of the first vampire film, are taking their relationship to whole new level.  In an interview with Cine Tele Revue, RPattz talked about some of his upcoming projects, one in which includes writing a script with girlfriend KStew.

“She knows how to find good scripts, she has the nose for that. I admire her. We’re trying to write a script together, it won’t be for now, but we’ve thought about it for a long time. For a year now we both had the chance to evolve in the job we love, especially in those amazing movie projects.”

Well isn’t that so sweet! And why wouldn’t the two lovebirds want to work together again?  Clearly, they know how to make some serious sparks fly – both on and off screen.

So what will said-film be about?  I highly doubt they’d go down the vampire route again, that would be a bit too much – even for me.  Perhaps a comedy?  Somehow I have a hard time picturing Kristen not only acting in a comedic role, but writing about one as well.  The young actress is very serious about herself and the types of roles she takes on.  She recently told VH1.com:

“There’s this really contagious energy that happens, that passes between people, that is really unique. And when you can find people that you can share that artistic energy with, it’s an addiction. You always want to get back to that feeling.”

Regardless of the script – you know my thoughts. I’m just happy they’re still going strong!