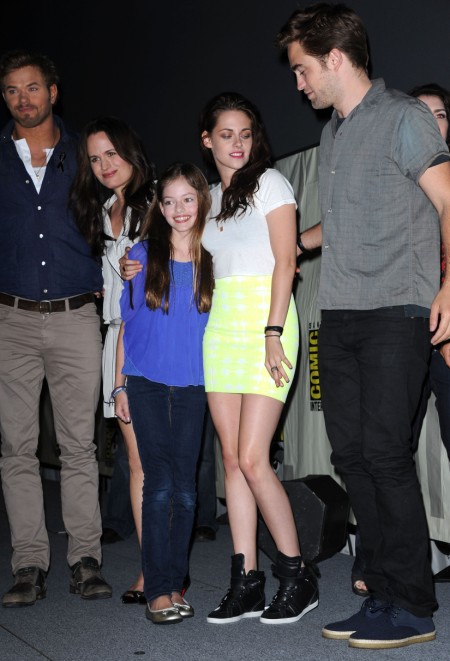 Many have speculated that the Twilight bigwigs were the ones who pressured Kristen Stewart to release that pathetic and embarrassing apology to People magazine, as well as the plea for Robert Pattinson to stay, but it turns out it was Rob who forced Kristen to fall on her knees to the public.

The actor was so devastated and furious when Kristen broke the news that she cheated with her Snow White and the Huntsman director, Rupert Sanders, he ordered her to make the statement so their legion of ardent and downright crazy fans wouldn’t blame him for the split. Way to think, Rob!

Robert, 26, who met co-star Kristen, 22, while filming the vampire blockbuster Twilight, “couldn’t believe what he was hearing” as his lover of three years told him the fling was just a “one off”.

Furious at her betrayal with Brit Rupert, 41, he demanded she apologise and she agreed.

She said in a statement: “I’m deeply sorry for the hurt and embarrassment I’ve caused.

“This momentary indiscretion has jeopardized the most important thing in my life, the person I love and respect the most, Rob. I love him, I love him, I’m so sorry.”

The source added: “Robert wanted the world to know that he hadn’t done anything wrong and that she had made a fool of him publicly.

“He still can’t fathom why she cheated. Kristen is begging for another chance. Robert is undecided.”

I have a feeling he’s going to take her back. He loves that girl. I don’t understand why, but he does. First, he’s going to make her pay. He’s going to put her through the ringer but, ultimately, he’s going to take her back and save her. Because if Rob can forgive, shouldn’t we? That’s the play Kristen’s people are going to make. It’s her only play. She has to grovel and eat sh-t but she’ll come out clean on the other side because Rob loves her and it will kill him to see her suffer long-term. Sure, right now it’s fun. He probably loves all the eternal fire and damnation she’s receiving but it will nag at him in a little while. It might take months but he’ll take her back. He might not keep her. If we’re lucky, he’ll ditch her after the final Twilight promos are finished, but he will take her back.

Can you imagine how awkward those red carpets will be if he doesn’t? I bet the studios are OK with Rob saving face and acting the big, tough man now (Edward Cullen can’t be seen as weak, after all), because isn’t salvation by way of love what Twilight is all about? Second chances? New leases on life? Edward’s – I mean Rob’s compassion is what sets him apart. Ya, that’s the play I think they’ll make. What about you?