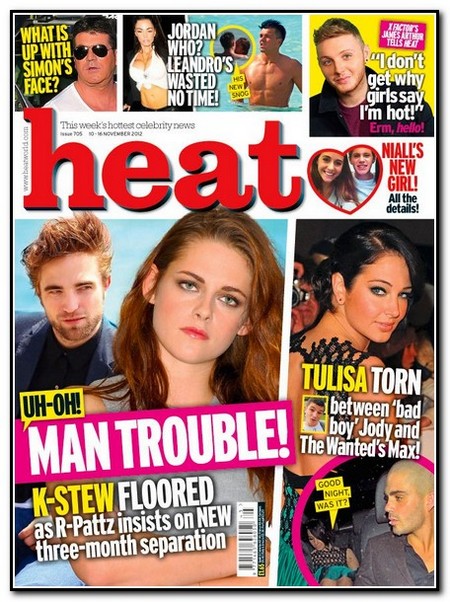 “Absence makes the heart grow fonder.”  At least that is what Kristen Stewart is hoping for after current beau Robert Pattinson demanded that they take a three month break from each other, according to the U.K.’s Heat magazine.

Pattinson is set to begin filming in Australia soon for his latest flick, The Rover, with Guy Pearce and he has told girlfriend Stewart in no uncertain terms that she is to stay away from the set.  This comes as a surprise to many who felt the on-again duo were hopelessly devoted to one another, but it appears that may be one sided.  Kristen has been doing her best faithful girlfriend impression and has been photographed in recent weeks holding hands with Rob, rubbing his chest and even went to visit him on the Jimmy Kimmel Live set while he was promoting their latest film the Twilight Saga-Breaking Dawn Part 2.

“Rob’s decision to leave Kristen behind has left her crushed,” a source tells the magazine. “They’re back together, but Rob is still hurting and feels that some time apart could be just what he needs.  It’s a risky decision, but one that Rob made while the whole affair scandal was going on. He decided that he was not going to make any sacrifices for Kristen – personally or professionally.”

Well surprise, surprise.  Rob has some balls after all and is letting Kristen know that he is not wrapped around her finger and p**** whipped as she had originally believed.  Our little Rob is becoming a man, finally.

According to the source, Kristen is not happy with Rob’s decision.  “She wants them to be attached at the hip because she knows what a fragile place she put them in. But Rob is still hurt from what happened.”  Hopefully she won’t go running into someone else’s arms out of loneliness.

What do you think readers?  Will Kristen turn into the evil trampire everyone thinks she is or will she be true to her man?