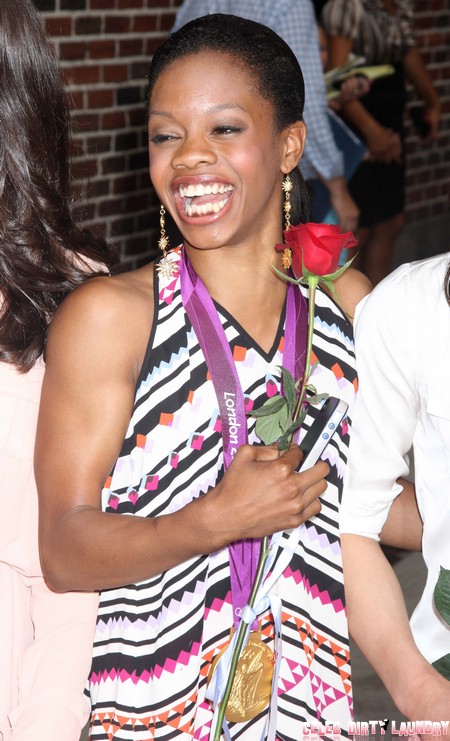 Our darling news icon of the month, Robert Pattinson, might have a rebound girlfriend. What was that other girl’s name again? Didn’t her name rhyme with Piston Hewert? That might all be a thing of the past for our fragile little Rob, because at the MTV Video Music Awards he was seen getting his much needed talk on with Olympic gymnast Gabby Douglas. According to Hope Carson over at Celebs Gather, Rob was “working the room” backstage at the VMA’s with Taylor Lautner (I see a Llama, you see a Llama, we all see a Llama) and bumped into Gabby Douglas and her entourage of gymnast teammates. They were allegedly “hanging on to his every word”. It seems someone will be writing vampire poetry soon, hey?

Gabby has made no excuse in previous interviews about her “Team Rob” status and her Pattinson fan girl attitude, so either this was the greatest moment of Gabby’s life, or this might have been the moment Pattinson realized that Piston was no more. According to our friends over at Hogwarts, Kristen Stewart was mumbling in her sleep last night and said things like, “One, two, Kristen’s coming for you… Five, six, grab your crucifix…”

We doubt there was any intimate or emotional connection between Pattinson and Douglas, but the few minutes she spent with her idol must have felt like a lifetime of opportunities, hopscotch and snow. He, on the other hand, must have been enthralled by America’s latest sweetheart.

Will this be bringing any absolution to the Pattinson heartbreak saga? Will we be seeing him Tweeting Gabby anytime soon? Was this a mere serendipitous occasion for both of them? We’re not too sure what the future holds, but one thing we know for certain is that Pattinson really needs to move on from that crazy whore face Spongebob bitch ex of his whose name rhymes with Piston Hewert.