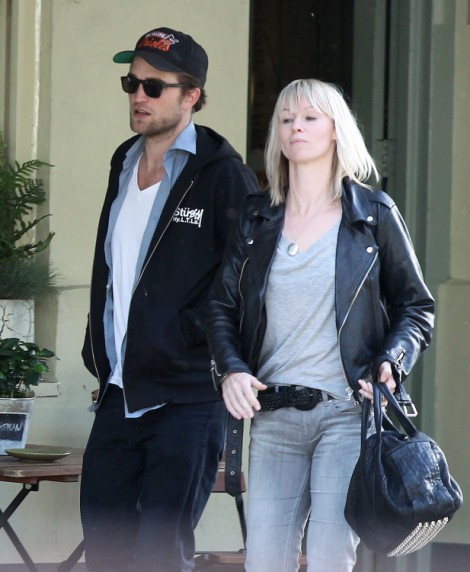 So maybe Robert Pattinson and Kristen Stewart are together but free to see other people? Because the old ball and chain isn’t stopping Rob from clubbing and picking up some fresh digits on the way. So who is Rob Pattinson partying with? By the lack of photos it sure isn’t Kristen Stewart.

Now magazine reports Rob chatted it up with Afghan actress Azita Ghanizada at Jimmy Kimmel’s recent Emmys bash at LA’s Soho House and they didn’t part ways until they made sure they could see each other again.

“She was wearing a figure-hugging dress and caught Rob’s eye immediately,” a source told the mag. “‘They spoke for well over an hour, to the exclusion of everyone else at the party. Judging by the effort Rob was making to impress her, there’s no doubt he was interested in seeing her again. He wouldn’t have asked for her number if he wasn’t.”

So if the source is true then this happened after Kristen’s camp spread the word that she and Rob were on the way back to happy town. What gives, Rob? Did you accept Kristen back under the terms that you would get to play around on the side until you manliness regained its confidence? See, this is why I think those crazy kids ran back together too quickly. Look at all the fun that can be had when you’re single, rich and ridiculously popular in LA. Too bad Tom Sturridge is practically an old married man now, shackled to Sienna Miller. Those dudes could have a blast. It’s not like it’s ever going to be hard for Robert Pattinson to get some ass. Oh I know! Rob isn’t like that, you say! Rob is sweet and sensitive and doesn’t do one-night stands. Robsten forever! Fine. Whatever. I’m not going to crush your dreams. But just so we’re clear. Rob Pattinson isn’t a 90-year-old vampire named Edward Cullen. He’s a dude who got cheated on in front of the whole world. Getting digits are the last thing Kristen Stewart should be worried about.

Do you think Rob and Kristen have an open relationship or was Rob just getting Azita’s number as a friend? It’s true, guys actually have girls as friends (although Billy Crystal might disagree) but how would you feel if you found out your boyfriend/ex-boyfriend did that at a party when you weren’t around?