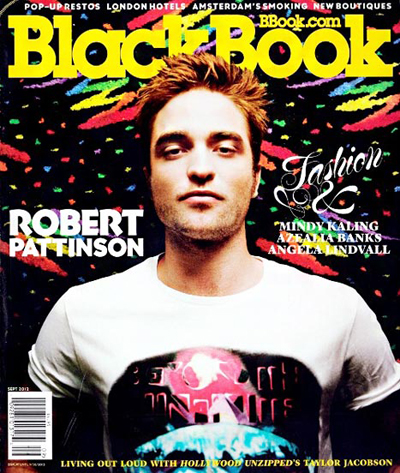 Does Robert Pattinson look chunky on the September cover of Blackbook Magazine to you? Because it seems the 26-year-old Twilight actor has a bit of a complex about his body image.

In the interview with the fashion magazine, Robert revealed that he was on an “all-liquid diet” in order to get into better shape. (Although, as much as he’d like to have chiseled abs, there was evidently no way this British boy was going to give up beer, especially since he recently stopped smoking.)

“I had to be shirtless for a photo shoot, so I asked a nutritionist what’s a diet in which you can still drink as much as you want. She said a liquid diet.”

“I was so impressed with myself yesterday,” he added, reports US Weekly. “I took a pee that was four minutes long.”

In addition to oversharing about his bathroom habits, Robert also shot down rumors that he was planning on proposing to his longtime girlfriend, Kristen Stewart. Related: Robert Pattinson and Kristen Stewart’s Shocking Tell-All

“There was a magazine, with these pictures, saying I was getting married. No one ever knows what is true or what isn’t,” he explained. “Even my own mum called to ask me if it was true.”