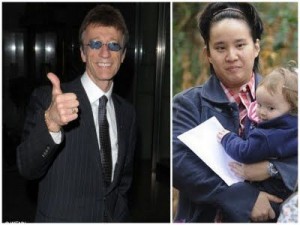 Meet Robin Gibb’s affair Claire Yang, baby mama (or whatever you want to call her) who just so happened to be the Gibb family housekeeper. Yes, he supposedly had an extramarital affair with another woman for eight years that resulted in a baby and he’s owning up to it (probably because he was forced to). So with that being said, Robin Gibb’s love child Snow Evelyn Robin Juliet Gibb was left a large amount of money to live. Let’s just say the now three year old little girl will be set for life.

According to Britain’s Sunday Mirror, Gibb left Yang a reported $6.4 million payment right before his death to make sure that the little girl would be looked after.

A source tells Britain’s Sunday Mirror, “Robin never walked away from his responsibilities and always made sure the child was fully provided for. Snow Robin is a Gibb child so will be treated exactly the same as the other three children.”

Things could get a little dramatic for the Gibb family as Robin Gibb’s wife Dwina could get screwed out of a lot of money IF Robin’s mistress steps up to request more money from Gibb’s large estate. For now they are just hoping that there is no drama at the funeral which is set to be held in June.

A source told the Mirror, “If Claire does go to the funeral she will be ­keeping her distance from Dwina and it will be awkward. Robin never walked away from his responsibilities and always made sure the child was fully provided for. It is not about the money but it is the nature of the lengthy legal process which distressed Dwina and the family. Relations between both sides have become very strained and Dwina is aware that is unlikely to be the end of the matter. It could get very messy and distressing.”

Back in 2008 Yang gave birth to Snow and Gibb made sure to take care of them as he is said to have dished out some money to move mother and baby into a house close to his home in Oxfordshire.