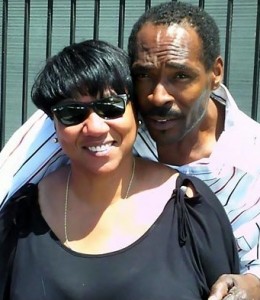 It is a tragic day for Rodney King’s fiancee Cynthia Kelley who found Rodney dead (as we reported here this morning at the bottom of his pool in Rialito, CA.

At around 5:25 AM this morning, TMZ reported that law enforcement responded to a call that had them frantically removing King from his pool and attempting to resuscitate him. Sadly they were unable to revive him and he was pronounced dead at 6:11 AM.

So who is Cynthia Kelley? What do we know about her?

Interestingly enough, Kelley was juror number five (and the ONLY African American) who served on the civil jury for King’s court case against the city of Los Angeles, which ultimately awarded him $3.8 million.

Of Kelly, King was quoted as telling Radaronline.com, “She is a godsend, a blessing in my life. I don’t know what I would have done without her in my life… I can’t wait to make her my wife!”

Both King and Kelley were married at the time of the beating and the trial and it was shortly after the civil trial ended that these two developed a secret romance that blossomed.

Kelley said of their first date, “Our first date was the next day after the trial when Rodney’s lawyer and Rodney met me in a local pizzeria in Newport Beach.”

But it was after that the pair separated as King worked on his addictions via VH1’s Celebrity Rehab and the couple was estranged.

“We hadn’t spoken to each other for many years, and it just so happened that we reconnected. It was like we were never apart from one another.”

Kelley claims she was the one who was able to get the other jurors to award King the $3 million.

She explained, “During deliberations, the other jurors said, ‘Let’s just award him $100,000, you know he’s just gonna blow it anyway’ It was a blessing that I was even there, the other jurors didn’t want to give him anything.”

Keep checking back here for more Rodney King news. Our thoughts are with Kelley and the other family and friends he left behind.