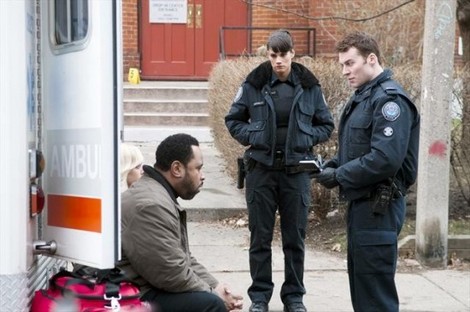 Tonight on ABC is an all new episode of Rookie Blue titled ‘The Rules.’  On tonight’s show When a death threat aimed at a local priest leads Andy and Nick to a neighborhood drug lord, the officers realize that they’re navigating a delicate war zone and that the priest may be hiding some surprising secrets of his own.  If you missed last week’s show called ‘Cold Comfort’, we have a full and detailed recap here for you.

On last week’s episode the officers were trying to move on with their lives in the face of a tragedy when they discovered a police laptop had been stolen, containing sensitive information. They set off on a hunt to recover the computer and prevent any dangerous fallout.

On tonight’s show when a death threat aimed at a local priest leads Andy and Nick to a neighborhood drug lord, the officers realize that they’re navigating a delicate war zone and that the priest may be hiding some surprising secrets of his own.

Meanwhile, Gail and Traci pick up one of the drug runners – a young girl whose refusal to be an informant compels Traci to make a major decision about her career. Chris and Swarek clash over what it takes to make a good cop, and Dov’s new relationship takes a dramatic and dangerous turn.

Tonight’s episode: The officers are putting the past behind them, Best wants them to be proactive and get down to the basics. Nash is back, this is her first shift and she wants to be back on the street. McNallly is ready to get started when Swarek approaches her and tells her that he needs to get the keys back for his truck; he obviously had something else to say to her. Swarek and Diaz head out while Nash and Peck get going.  Diaz tries to talk to Swarek about the breakup, but he doesn’t want to talk about it. Meanwhile, Collins tries to talk to McNally about the same thing, she shows him a book she got to help her get over Swarek.

Swarek and Collins stop a guy and give him five tickets, they gets mad and actually hits Swarek in the chest, now it’s an arrest for the loser.

McNally and Collins head to a van that is on fire, McNally notices that there is another white van nearby that has the words, “your dead” written on the side.

The owner of the van is a priest and he thinks it was probably just a junkie that set the fire but McNally thinks someone may be after him because of the message.

Peck and Nash are out canvassing the neighbourhood where the priest is from to see if they can find out anything. They see a bunch of kids that are drug runners and when they try to approach them a girl throws a slush at Peck who then puts her in the squad car.

Curtis Payne is the neighbourhood drug lord, when McNally and Collins are at the church to ask some questions about him there is a drive by and shots are fired.

Swarek makes an ass out of himself, even Callahan noties when he basically puts down McNally  and Collins because they were unloading tomato sauce when the priest was shot at, it wasn’t called for.

Shaw tells the priest that he is going to keep the police around to protect him and when he doesn’t want it, Shaw tells him that he is not asking.

Peck and Nash are with the little girl at the station, her name is Jordan and she claims she doesn’t work for Payne anymore, they find cigarette burns on her arms.

Epstein helps Crystal to move into her own place when she makes a pass at him.

Swarek heads to a restaurant that Payne owns and find him there. Swarek frisks Payne and when he doesn’t find anything, Diaz reminds him that they are done. Swarek issues a warning to Payne before they leave, he tells him to stay away from the priest.

McNally and Collins notice the priest come out of the church and talk to some window washing guys, the next thing you know, there is soap all over their squad car and the priest gets away.

Swarek really wants to rattle Payne’s cage, he sees a bunch of kids and goes to arrest them before he even has a reason to.

McNally and Collins find out that there is war between the priest and Payne because of a child named Thomas who recently started selling drugs for Payne.

Nash tries to drill Jordan again, meanwhile Shaw was going through her phone and found a video of a boy being initiated into Payne’s gang., it’s Thomas.

McNally and Collins are at Thomas’s house to speak to his mother, they find out that the priest, John Pierre is Thomas’ father.

McNally and Collins head back to the restaurant, they find the priest and tell him he shouldn’t be there. The priest has a gun and tells them that he is going to kill Curtis Payne when he comes out of the room. McNally reminds the priest that he teaches the kids, “thou shall not kill” and if he kills Payne, he will lose his son forever.

Swarek arrives on the scene in time to take Payne into a squad car while McNally’s cuffs the priest.

Callahan and Nash have Payne into custody and show him the video from Jordan’s phone; they’ve got him where they want him, he’s going to give up something for a lighter sentence.

Peck gives Jordan her card and tells her if she needs anything feel  free to call her, Jordan crumbles it and throws it to the floor as she heads to child services.

Diaz tells Swarek that the police work they did today when they arrested all those kids was dumb and whatever he is going through, he needs to deal with it soon.

Payne ends up giving some names, they are able to make eight arrests.

Callahan gives Swarek some advice even if he doesn’t want it, he’s an idiot and if he doesn’t smarten up soon he is going to lose McNally for good.

Epstein leaves Crystal and notices he is being followed by three big guys, they beat him and tell him to stay away from Crystal.