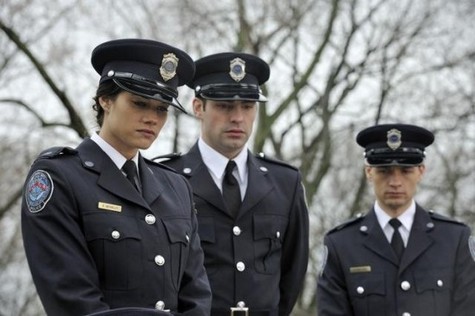 Tonight on ABC is an all new episode of Rookie Blue titled ‘Cold Comforts.’ On tonight’s show the officers are trying to move on with their lives in the face of a tragedy when they discover a police laptop has been stolen, containing sensitive information.  If you missed last week’s show called ‘Out of Time‘, we have a full and detailed recap here for you.

On last week’s episode the officers of 15 Division were forced to release a suspected predator for lack of evidence. But when Dov and Chris made a grim discovery — a missing girl’s body, hidden in a deserted ravine — all bets were off. Detective Luke Callaghan returned to oversee the homicide investigation, and soon realized this might be the work of a serial killer.

On tonight’s show The officers are trying to move on with their lives in the face of a tragedy when they discover a police laptop has been stolen, containing sensitive information. They set off on a hunt to recover the computer and prevent any dangerous fallout.

When Andy, Nick and Swarek uncover a drug informant who may have been compromised by the leak — and when Sam suspects the informant’s motives — it drives a wedge between Andy and Sam, unleashing pent up emotions.

Tonight’s episode: The show begins with Jerry’s funeral, it’s raining and everyone shares special thoughts about him, Noelle is the first one to leave as Frank is waiting for her in the car with the baby.

Gail is still in the hospital recuperating from her injuries. Meanwhile, Andy goes to see Traci at home and reminds her to eat.

Sam appears to be upset about something, he won’t tell Andy what it is and asks the sargeant if he can ride only for one day.

A lady arrives at the station, she wants to talk to Jerry so Andy approaches her to help, it appears that Jerry promised to protect her.

Traci arrives at the station and advises that Jerri’s computer was stolen. Sam heads to a pawn shop in the hopes of finding Jerry’s computer, he gets lucky in finding it.

Luke is with Gail, he needs to get more details about her kidnapping by the guy who killed Jerry. Chris is cleaning out Jerry’s desk with Dov when he finds a wad of cash.

Sam got into Jerry’s computer, while Dov walks into Frank’s office with the cash. Frank tells Traci that Jerri was obviously working on something, he was going to use the 30k for a buy to catch a drug dealer.

The informant in the drug case, Dale Curry is found and he finds out that Jerry is dead but tells Andy and the other officers that he still needs to deliver the money or he is going to be dead. He also wants to know where his little 16 autistic brother Grabriel is, he thinks the drug dealers have taken him until they get the 30k.

Oliver is drowning his sorrows in a bar when Noelle goes to see him and tries to cheer him up.

Andy and Sam are looking for Gabriel but they can’t find him and Sam doesn’t think the whole story is true about the brother anyway. Traci is still at the station and checks in on Gail.

Andy convinces Dale Curry to go back in, they want him to deliver the money so they can complete this job that Jerry was working on. Traci goes to see Gail in the hospital and tells her that it is not her fault that Jerry is dead, but Gail is blaming herself because she had Jerry’s cell phone. Gail is upset because she thinks that everytime Traci looks at her she is going to be reminded of Jerry’s death. Gail wants to do whatever she can to make Traci feel better.

Dov and Chris are still going over Jerry’s things while Traci convinced Gail to leave the hospital to go see Oliver at the bar. Oliver doesn’t seem to be able to cope with Jerry’s death. Noelle is also at the bar with the baby.

Chris, Sam and Andy are listening in on Dale Curry when he drops the money. The wire is down, Sam thinks he may have taken it off himself and ran with the money. Andy goes in and discovers there is trouble. Chris and Sam go in and find Dale Curry, he tries to make a run for it but they catch him.

Nick looks further into finding Dale Curry’s brother, he died five years ago, he was lying about his brother. Andy goes to see Dale Curry in jail and is furious, he can’t believe that he lied when Jerry trusted him.

Chris and Dov found a picture of Jerry’s foster kid, they bring the photo to Traci who didn’t know anything about it, they also hand her a letter that was in Jerry’s drawer. Everyone is at the bar, Oliver makes a toast to Jerry. Traci gets up and she tells everyone that Chris and Dov found a speech that Jerry wrote for his wedding to Traci, she reads it to everyone. At this point, everyone is crying and Traci cannot continue, Gail takes the letter and she reads the rest of it.

Andy meets up with Sam and tells him that he was right, Dale Curry was playing her. Sam tells Andy that he can no longer be a cop and be with her, this is his feeling in his gut, he can’t do this anymore. Andy is shocked and asks him right out if he is saying it is over, he doesn’t answer, but the look on his tells her it is over, he gets in his truck and leaves.

Traci asks everyone to raise a glass to Jerry and tells them they are the reason she got out of bed this morning.