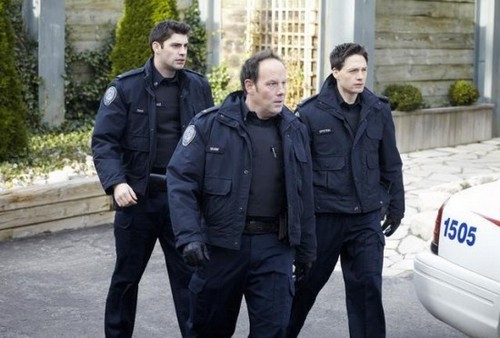 Tonight on ABC is an all new episode of Rookie Blue titled ‘Out of Time.’ On tonight’s show the officers of 15 Division are forced to release a suspected predator for lack of evidence.  If you missed the last show called ‘The Girlfriend Experience’, we have a full and detailed recap here for you.

On last week’s episode a grad student’s disappearance led Andy and Nick to discover the woman’s double life as a high-end escort. When a pattern of missing women emerged, Gail, who is physically similar to the victims, is sent in on an undercover sting operation.

On tonight’s show the officers of 15 Division are forced to release a suspected predator for lack of evidence. But when Dov and Chris make a grim discovery — a missing girl’s body, hidden in a deserted ravine — all bets are off. Detective Luke Callaghan returns to oversee the homicide investigation, and soon realizes this might be the work of a serial killer.

When they learn that Andy has been assaulted and Gail violently abducted following the call girl sting, the officers rally in a race against time to track down Gail’s captor before it’s too late. Following up on a simple lead, one officer ends up directly in the path of the killer. Will it end with the ultimate sacrifice?  The conclusion of this two part story airs next week.

Tonight’s show: The show opens up with us seeing Gail on the floor, she was attacked and Andy walks in to also get attacked, then it’s the next day and Traci and Jerry are enjoying some quality time over breakfast when he starts talking about getting a new place and maybe having a baby together.

Everyone gets briefed on a case about a dead girl named Nicole Marshall. Sam calls Andy and she tells him that something happened to Gail, she saw that her hands were zipped and there was blood all over her face, then she was attacked with a needle to the neck so she has no idea what the attacker looks like. Sam wants Andy to go to the hospital to find out what she was shoot up with.

They think it’s the same guy that attacked Nicole Marshall and Gail; they have 14 hours to find Gail or they think he will kill her.

Officers of 15 Division are forced to release a suspected predator for lack of evidence, he was the last known client of Nicole Marshal. Luke Callaghan is back to oversee the homicide investigation, he thinks it’s the work  of a serial killer. Andy is back in uniform, she’s ready to help out to find the killer.

Charlie Davis is back in the precinct and he claims he has no idea where Gail is, he goes on to say there are cameras all over his house that will collaborate that he wasn’t there last night.

Gail is in a basement, she has a blindfold on and her hands are bound. The killer walks in and washes his hands, he tells her that he is keeping her hydrated. He then puts up black gloves and fills another needle with a drug which he injects into her arm.

Davis’s story is collaborated; they need to look for another suspect. The connection between the dead girls appears to be the Archer Hotel. Meanwhile, Noelle is having false labour and Traci is worried about her.

The surveillance video shows that the bartender at the hotel, Seth McKeagan may just be their next suspect. Nick wants to pump up the cops on the streets where most of the bodies were found, Luke approves it.

It turns out that Seth McKeagan was at a club called Jet Pack from 2am to 5am and therefore could not have followed Gail home and attacked her. Jerri calls Traci and tells her that the drug found is a tricky combination and therefore the person who made it had to know what he was doing.

The cabbie now knows that Gail is a cop from Jerry, he tells her that he wanted to take care of her and she ruined the whole thing. As he comes up the stairs with Gail, Jerry comes out of nowhere, with multiple stab wounds, and tries to attack the guy but it doesn’t work.

Sam and Andy arrive at the cabbie’s house and find Jerry on the floor stabbed, he is still alive and tells Sam that the guy left with Gail but he planted his cell phone on them, they just need to track it and they will find her. Jerry is slipping fast, his eyes are rolling back.

The paramedics arrive to help Jerry, just when Gail is found safe and the cabbie is apprehended.

At the hospital, Sam looks at the pocket watch that he bought Jerry but never gave to him. Frank says that the killer was a doctor that lost his licence a couple of years ago. Noelle had her baby, it’s a girl and both are doing well. Traci is with Noelle, she tells her that she has ten messages on her phone, so they must have found Gail. Traci leaves the room and finds Andy crying, she tells her that Jerry’s dead.

Gail is in the hospital, she looks like she is going to be fine. Noelle is with her new baby when Frank comes into the room and kisses the baby.

Wow, what an awesome episode, I can’t believe that Jerry was killed, can you? What did you think of tonight’s episode, sound off your comments below and let us know.