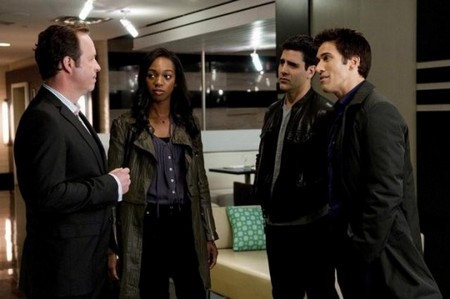 Tonight on ABC is an all new episode of Rookie Blue titled ‘The Girlfriend Experience.’ On tonight’s show a grad student’s disappearance leads Andy and Nick to discover the woman’s double life as a high-end escort. If you missed the last show called ‘Leap Of Faith’, we have a full and detailed recap here for you.

On last week’s show after the embarrassing loss of a key witness in an upcoming organized crime trial, the officers of 15 Division had to turn to a man who claims he is a gifted psychic to help track the witness down. Having taken a leap of faith when his information checks out, they begin to suspect the man’s motives.

On tonight’s show A grad student’s disappearance leads Andy and Nick to discover the woman’s double life as a high-end escort. When a pattern of missing women emerges, Gail, who is physically similar to the victims, is sent in on an undercover sting operation.

Meanwhile, Dov and Chris are following a different lead, and when they uncover the body of a missing woman, the case takes an even more dangerous turn. A twisted killer is still at large, but, now, does he have his sights set on Gail? This first part of a two-part story arc of “Rookie Blue”

Tonight’s recap: On tonight’s episode Andy and Nick are the first from Division 15 on the scene of a domestic dispute. A woman named Liz is missing and her boyfriend is flipping out on her friend, Rachel. Rachel runs an escort service but is stone-walling Andy on getting any information. As it turns out another girl named Nicole Marshall is also missing. Both girls are escorts working for Rachel and both have the same john. Gail asks to be put in as an escort since she fits the physical description of the missing girls.

Gail begins building her online escort profile with the help of Andy.  She is coached and prepped by all of Division 15 before actually meeting the guy that they believe is responsible for abducting these women.  She is reminded that money has to change hands and then to call and order a bottle of champagne.  That’s the signal for the rest of the unit to move in.

The mark shows up and seems to have a real attitude immediately.  He wants to know why Gail escorts and finds it ironic that she’ll pay attention to him if money is involved. She stands up to him, calling him deeply insecure and that seems to be a turn on for him.

He puts Gail into an elevator and everyone loses them.  They don’t get off the elevator and appear to have just disappeared. Andy and Nick are dressed as a couple having dinner and had been directed to go upstairs ahead of Gail and this guy.  They are horrified to realize they’ve lost track of her.  They check the security cameras and find her in the parking garage on the security camera. Nick moves in and takes down the guy whose name is Charlie.

Jerry moves in to interrogate Charlie about Liz and Nicole, the missing escorts.  As they talk, Liz actually walks in to the station and explains that Charlie didn’t hurt her.  She left because her boyfriend hit her after he found out how she’s making her money.

Gail talks to Andy and tells her she actually talked to Charlie and was more honest with him than she has been with any man in a long time.  Sam and Dev end up following a tip that they think could lead to a body as Gail puts herself into a cab. She’s staying at Andy’s while her apartment is renovated.  Gail gets to the apartment and settles in. She calls Nick asking him to come over. There’s a knock on the door and Gail gets taken down hard. Someone fitting Charlie’s build beats the crap out of her.  The second part of this episode airs in two weeks!