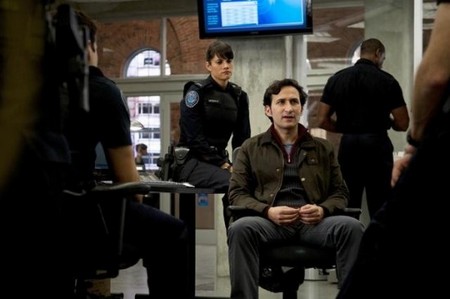 Tonight on ABC is an all new episode of Rookie Blue titled ‘Leap Of Faith.’ On tonight’s when Detectives Callahan and Rosati disagree about the facts of a crime. If you missed the last show called ‘Coming Home’, we have a full and detailed recap here for you.

On last week’s show a noise complaint at an illegal warehouse party led Andy and Swarek to an injured John Doe, a homeless squatter who had been brutally stabbed. They apprehended a surprising material witness — Oliver Shaw’s 15-year-old daughter, Izzy.

On tonight’s show after the embarrassing loss of a key witness in an upcoming organized crime trial, the officers of 15 Division must turn to a man who claims he is a gifted psychic to help track the witness down. Having taken a leap of faith when his information checks out, they begin to suspect the man’s motives…

Detectives Callahan and Rosati disagree about the facts of a crime. Lukes erratic behavior gets him kicked off the case.  Is he a talented psychic or brilliant con man? The police are compelled to confront some hidden truths about themselves and their fellow officers.

Tonight’s recap:  Collins is in the patrol car and they have a key witness to an important case  in the back seat.  Shaw needs a pes break and they stop, Shaw leaves.  The witness tells Collins he has to pee too.  As they get out of the car two mask men with guns come up behind them and make them get on the ground.  Then take the witness with them in their back Black SUV.

Sam is in bed with MacNally and he gets a call he has to go in .  MacNally is working out with Traci and she asks her how long did it take her man to say he loved her.  She tells her four days and McNally is shocked.

The officers meet and they learn about Vinnie the head of an organized crime ring  and they are toldthe witness that was going to testifym has been taken and their is not case anymore because of that.  They are going to prep the other witness to make sure they did not miss anything.

Epstein is told to go speak to Sue Tran to prepare her for the court case.  McNally tries to reassure Collins, tells him it could have happened to anyone. (losing the witnesss)

The officers think is ridiculous.  Jerry tells them  too bad they need to take the psychic around in the car and maybe he can help.

Epstein is kicking around the vending machine and Sue comes up to him.  She tells Epstein she hates talking in front of people, she gets sick.  He tries to lighten up her mood.  He asks her to have breakfast after work and talk.  She wants to talk now because she is nervous why he wants to see her.

Jerry gives Trish a gift for their anniversary and it is in a jewelery box so she thinks is is jewelery – when she opens it up, it is a knife, how romantic. NOT!

McNally and Sam are driving around  the car with the psychic and Sam is frustrated he thinks it is a waste of time.

Peck and Diaz are listening to the witness against Vincent.  They both leave the room for a minute to talk, they do not believe what the man is telling them.

McNally and Sam are still driving around and she spots the parking garage that matches the psychic’s description.  MacNally, Sam, Collins and Shaw search the garage and they are not convinced they will find anything.

Sam and McNally go one way and Collins and Shaw go another way.  As Sam and McNally walk they hear something, turn around and it is the black SUV.  The person in the SUV shoots at them.

They get back to precinct 15 and take the psychic in, they find out he has a link to Bobby Love.  Jerry goes in to see the the psycic and tells him they know who his sister is and she is related to the man on trial Vincent.  He wants to know where the witness, Bobby Love is.

Jerry tells  they are going to book him on obstruction.

Peck and Diaz  go back to the witness they were questioning about the fire bombing.  Diaz realizes the man is an addict.  He swears he has been clean for years.

Epstein is practicing with Tran – she is very nervous.  Epstein tries to relax her and he is successful.  She grabs him and plants a huge kiss on him.

Trish comes to see Jerry.  He is lamenting about his night, his star witness is gone, his other witness is a crack addict and Tran is probably going to stutter on the stand.

Jerry asks Trish how she liked her gift and he can tells she was not exactly pleased even though she pretends she was.

Lukes(psychic) is in jail and he tells Collins who just came in he probably saw more than he thinks.  Lukes tries to get Collins to remember what he saw.  The exercise works and Collins remembers something.  He runs upstairs to look through the pictures again and finds the man it is Tony, Vincent’s right hand man and he drives a black SUV.

Trish is sitting looking at her present, a knife, from Jerry.  She cannot believe it has been three years and the guy does now know her.  McNally picks up the knife and says, “Holy Crap” and she gives Trish back the knife.  It is engraved, “Will you marry me?”

The witness starts screaming he knows where the witness is.  He tells them he is near a silo and  McNally and Sam drive around to eyeball it.  Finally they find it and get out of the car at a cement factory.  They see an SUV and clean the license and he tells McNally they got him.

They call for backup.  McNally and Sam go to look and Bobby (witness) is getting beat up.  They come in and tell the men beating him up to put their hands up and they arrest them.

Jerry thinks that he knows how Lukes (psychic) found out where the witness was.  Jerry thinks he did it for his sister who is married to Vincent.  Apparently Vincent beats the crap our of his sister.  They call his sister and she claims she has not spoken to Lukes in three years.  They ask her if her brother was a psychic and she confirms he is.  Jerry is not buying it.

They tell the ex-crack addict that he still has to testify but it won’t be a long one because they found the key witness.  Diaz tells the witness he needs to get clean, he knows although he says he is clean, he is not.  Diaz tries to convince him to go to one meeting, but you can see he is not going to.

Epstein tells Chan she has everything down pat to testify.  Sue Chan asks him what is wrong.  He tells her she is perfect for him but right now he is stuck.  She tells him ‘stuck’ is a horrible way to describe it.  He apologizes.  She is pissed she feels he has lied to her, she tells him she has faith she will find someone else who will love her.

The psychic (Lukes) is being released, he says he is not calling his sister.  He asks William if she is getting her sister to come out and help with the baby.  He lets her know she is having a girl.  Shaw tells Lukes he is a fraud.  He gets upset and starts telling the members of the squad room some hidden truths about themselves and their fellow officers.

McNally is waiting for Sam – he gets into the car and she tells him she loves him.  She tells him he does not have to say it back and never has to say it.  She just wants him to know.