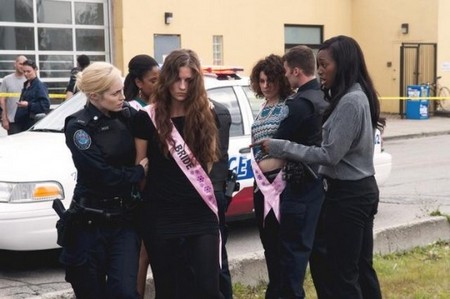 Tonight on ABC is an all new episode of Rookie Blue. On tonight’s show Chris not only realizes he still has feelings for Gail but that he also has competition. If you missed the last show called “A Good Shot”, we have a full and detailed recap here for you.

On last show before the hiatus episode Dov’s world exploded into chaos when he walked in on a convenience store robbery in progress – and shots a young black teenager, who may or may not have been armed. The tight-knit community erupted in outrage, as the ensuing investigation called into question whether Dov used excessive force or acted too quickly.

On tonight’s episode all hell breaks loose on Traci’s first day as detective when a carload of young women from a bachelorette party slams into another vehicle, apparently killing the driver. When the police discover that the driver of the parked car was dead before the accident, Traci realizes that her “rookie” handling of the car crash may have compromised the pending homicide investigation.

Meanwhile, as Gail and Chris work together on the case, Chris not only realizes he still has feelings for Gail but that he also has competition. Finally, when Traci and Andy uncover a secret the bride is desperately trying to keep, it’s a race to find the murderer before he strikes again.

Tonight’s episode is going to be an exciting one that you won’t want to miss, so be sure to tune in for our live coverage ABC’s Rookie Blue tonight at 10 PM EST!  While you wait for our recap hit the comments and let us know what you think of season 3 of Rookie Blue, so far!

RECAP: The gang partied way too long and is having a hard time pulling themselves together for work.  It’s Traci’s first day as detective and she is the only one that looks even a little bit alive.  Gail realizes that she drunk texted Nick while out the night before and is horrified.  Dov is desperate to get back to work but they still won’t clear him for duty until his excessive force case wraps up.

The unit is called to an accident scene where girls from a bachelorette party slammed into another car, pushing it onto train tracks.  The party girls are still wasted which irritates McNally.  Traci is called to the scene and is obviously very nervous.  She is being pushed to wrap things up because one car with a dead guy has the city at a stand still. All of the party girls insist they were driving but an eyewitness says the bride was behind the wheel.

After Traci moves the car she realizes she compromised the scene of a homicide because the head guy was long dead before his car was hit.  He was stabbed before the other car collided with him.

Dov is caught in the neighborhood where the kid that he shot in the convenience store used to live.  His sister sees Dov and confronts him. He tells her he’ll do anything to fix things so she asks to go for a ride.  She wants to know exactly what happened to her brother while Dov drives.

The maid of honor spills the beans and says the bride spent time at a club with the dead guy shortly before they hit his car.  The bride admits to doing a line with Jessie, the dead guy, but swears she left him alone with some other guy.

Dov goes into details with his victims’ sister.  She eventually gets out of the car and storms off.

The Rookie’s are starting to get there case together and realize their victim is connected to a drug ring.  The bride had no drugs in her system which confuses Traci.  She admits that she was going to hook up with Jessie but his brother got in the way that night.  She gives Traci Jessie’s correct address and the police scramble to get there.  The place is a drug den and many are arrested on the spot.

Eventually Traci pieces everything together, saves face and solves the case.  She proved that she can handle herself and will be a great detective.