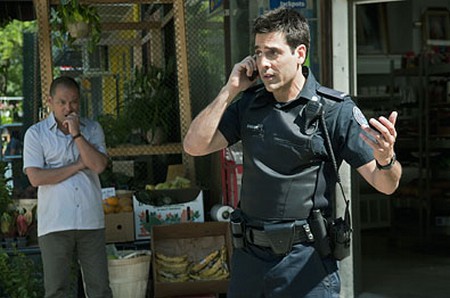 Rookie Blue is back tonight on ABC with episode 2 of season 3 titled ‘A Good Shoot.’ On last week’s show the theft of an armed police car toped the list of dangerous pranks as local schools winded to a close for the summer. While tracking down the stolen vehicle, Andy and Swarek picked up the trail of a hotheaded teen boy who robbed and violently assaulted a notorious local criminal – who happened to be his girlfriend’s father. If you missed it, you can read the full recap HERE.

On tonight’s episode Dov’s world explodes into chaos when he walks in on a convenience store robbery in progress – and shoots a young black teenager, who may or may not have been armed. The tight-knit community erupts in outrage, as the ensuing investigation calls into question whether Dov used excessive force or acted too quickly.

Filled with self-doubt, Dov is left to wonder if he operated within the guidelines or if he will be charged with murder, as 15 Division struggles to prevent a riot in the sweltering streets

So make sure to come back tonight at 10PM when we will be live blogging the episode with all the up-to-the-minute details.   Refresh often to get the most up-to-date info!  Remember Celeb Dirty Laundry is your one stop shop for all your reality TV and television series recaps.

RECAP: Tonight’s episode starts off with a bunch of quirky moments including Dov deciding to stop in a convenience store for licorice. He has a stand off with a young black kid who is behind the counter. The kid drops to the floor and Dov draws his weapon. He can’t get the kid to stand down and Dov fires a round right after the kid fires on him. Dov gets him in the neck and the whole scene leaves bystanders scrambling to call for help. His partner Diaz missed the action while waiting outside in the squad car. The partners are placed in separate cars so that they can be questioned separately. Dov is informed that he’ll be put on administrative duty while the shooting is investigated.

Investigators from the SIU show up and take over the crime scene as Dov finds himself handing over his weapon and uniform to an investigator.

He is then interviewed on videotape, going over every detail of what has transpired.  They keep flipping between Dov’s interview in one room and his partner’s in another. The questions take a negative turn, insinuating that Dov could be a gang member, a racist or had some sort on vendetta against the kid.

The gun seems to have disappeared and one of the witnesses is lying after likely stashing the gun.  He is painting Dov as a cold blooded child killer.  That makes him start to question himself and what really happened.  15 Division starts looking more closely at the store owner as Dov goes over the details of the shooting again, this time with Nash leading him through questioning.  Meanwhile, the others are back in the convenience store going over how the crime unfolded.  They realize the gun is missing because there was another kid hiding behind the counter.  He likely got out the back door with his friend’s gun.   Jump to the next scene where this random kid is being chased by police and lo and behold, the find the gun on him.  Dov looks incredibly relieved to have visual proof that there was a gun and that he hadn’t shot a kid armed with a cell phone by mistake.

This episode ended with the simple statement that Dov  was proven innocent because his team believed in him and fought to find proof of his innocence.