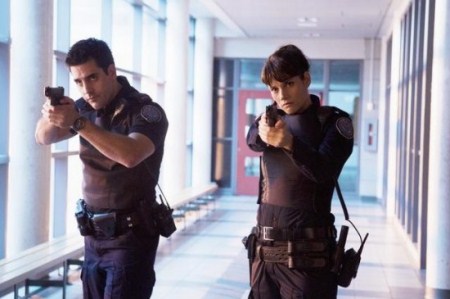 Rookie Blue is back tonight on ABC with episode 2 of season 3 titled “Class Dismissed”. Did you see last week’s premiere episode? If you missed it, you can read the full recap HERE. William Shatner was the guest star and he appeared as a drunk driver.

Episode Synopsis: The theft of an armed police car tops the list of dangerous pranks as local schools wind to a close for the summer. While tracking down the stolen vehicle, Andy and Swarek pick up the trail of a hotheaded teen boy who robbed and violently assaulted a notorious local criminal – who happens to be his girlfriend’s father. Andy and Swarek must find the armed teenager before disaster strikes, on “Rookie Blue,” THURSDAY, MAY 31 (10:00-11:00 p.m., ET), on the ABC Television Network.

The stakes are higher, the cost is greater, and the victories and tragedies have far greater consequences in a world where danger, sex, and high-stakes drama intermingle with the natural heartbreaks of policing.

So make sure to come back tonight at 10PM when we will be live blogging the episode with all the up-to-the-minute details.

Celeb Dirty Laundry is your one stop shop for all your reality TV and television series recaps.

RECAP: Dov and Oliver are on a call in a school and they find pigs and a photo of a pig with a cop’s hat on that says “Oink oink, I hope you remembered your keys”. Dov runs outside and the squad car is gone, he did leave the keys in it.

Sam just woke up and Sam is getting ready for work, Andy wants to know when they are going to stop doing this, leaving each other and running out the door in last night’s clothes. He tells her they get to spend the whole day together, at work.

Dov is jogging and can’t believe he sees one of the posters with Chris on it. He heads back to the apartment and Sue tells him she is heading to the park to do suicide drills.

At the startion, Frank tells Noelle that the Superintendant is all over him on this missing squad car. Traci wants a coffee, but Frank makes sure she gets decaf.

Gail is flirting with Nick, she tells him that he has not grown up.

Frank tells everyone at the station about the squad car that’s missing, everyone laughs but Frank doesn’t think it’s funny. Frank goes on tell them that the car has a loaded gun and an expensive computer in it and he want’s it back.

Andy is in the car with Sam and tells him that she didn’t want to freak him out earlier in the morning, just then a car swerves in front of them, they follow him and when the vehicle stops, they run after the suspect. Andy runs after the guy and he is hurt after jumping a fence, when Sam calls her she gets distracted and the guy tries to get her gun, then runs off; he drops a bag full of money.

Dov and Oliver are in the car and he gives Oliver a list of places where he thinks the scavenger hunt would take place. Oliver tells Dov that everyone screws up now and then, don’t worry about losing the car.

Sam checks on Andy, to see if she is ok. He asks her why she didn’t shoot the guy, she says he was just a kid. Barber shows up on the scene and tells them to head over to West Lake Collegiate because there is a parking pass in the car for that school. Andy finds out that the car is registered to someone named Stella.

Chris and Tracy catch a kid trying to steal a sign. The kid recognizes Chris from the billboards. The kid’s friends call him TBone and is heading to the station to answer some questions.

Nick and Gail are at the station, the chemistry is steaming up between these two. Frank tells Nick that he is supposed to be on patrol, but he explains that Noelle had to turn back.

Frank goes to see Noelle, she is not feeling well but has an ultrasound next week.

Nick asks Gail to go for coffee and she turns him down. Frank tells Nick to get back on the road and he suggest that he go with Charloette, Frank agrees that they should both go look for the missing squad car.

Andy and Sam find Stella, they ask her if she loaned her car to anyone and she says no and it’s been in her father’s garage all week, Alvarez Auto Body.

Chris is at the station with TBone, he tells him that one of the guys involved in the scavenger hunt stole their cars, but TBone already knew about it and tells him that everybody knows.

Andy and Sam head over to Alvarez’s body shop and want to meet with Bobby, the owner and Sella’s father, they find him bloodied and passed out on the floor to his office.

Chris emailed Gail the scavenger list and she is in the car with Nick, she screams at some kids and he tells her that she is too much of a bitch, he likes the old Gail better.

Sam and Barber are on the scene of the crime, they have prints and they belong to a guy named Wyatt.
Oliver and Dov are still looking for the car because Dov tells him he will never be able to return to Sue if he doesn’t find it.

Tracy and Chris found a credit card on TBone, it belongs to his mom and his real name is Troy. He tells them that his mother gave it to him because he is alone during the week, she works out of town. Troy goes on to tell them that he was stealing the sign to act like a badass.

Andy and Sam are at Wyatt’s place, they found some bloody clothes. They find a room that has pictures of Stella all over the walls. Barber tells them to find Wyatt because if Alvarez’s people find him first, he is dead.

Oliver can’t believe that some kids stole their squad car and then according to Troy, they are tweeting about it under alias names.

Olver and Dov find the car, there are two kids inside and they are wearing pig masks and Oliver tells them, “these little piggies are going to jail”. Dov tells him that the shotgun is missing.

Andy and Sam are looking for Stella, some guy who looked like he had been in a car accident just came and got her, they are in the auditorium.

Oliver and Dov find out that the two kids sold the shotgun.

Andy and Sam are in the auditorium and they find Stella and Wyatt arguing. Wyatt tells her that her father didn’t want him seeing her. All of a sudden, Wyatt tells Stella he was just trying to get the money his dad owed him and then he starts shooting at Andy and Sam.

There is no where to go, Stella is crying because she wants to know what happened to her dad. Sam tells Wyatt that if he loves Stella he would let her go and he does. Sam tells Wyatt to put the gun down but Andy figures out that he has used all the bullets so Sam walks up to him and takes the shot gun from him.

Wyatt is going to jail and Stella is not that heartbroken, she realizes that she didn’t really want to be with him after all.

Troy’s mom is coming to pick him up, Traci doesn’t like it and it makes her think of her son Leo.

Gayle finds Nick in the change room and tells him she will meet him outside.

Wyatt tells Barber that he didn’t mean to hurt anyone, he just wanted to be with Stella.

Andy is with Sam and tells him that she feels he doesn’t think they will last. Sam tells her that they are different, but they will get through it. Sam wants to know what the rush is, but she doesn’t answer.

Dov confesses to Sue that it was his squad car that got stolen.

Oliver calls Zoe, he is outside the house and wants to see the girls but she turns him down and tells him he can see them on the weekend.

Noelle tells Frank that everything is perfect with the baby, she had the ultrasound.

Gail and Nick are drinking a shot, they start reminiscing, then shake hands and declare they are friends. All of a sudden, Gail turns around and gives Nick a long steamy kiss.