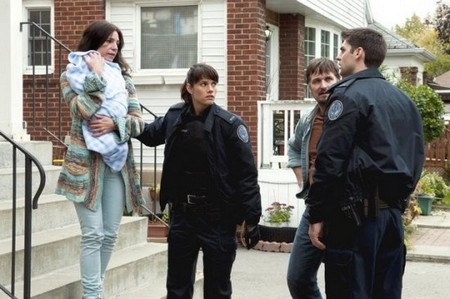 Tonight on ABC is an all new episode of Rookie Blue. On tonight’s show when Andy responds to a domestic disturbance the social worker on scene is none other than Claire. If you missed the last show called “Girls Night Out”, we have a full and detailed recap here for you.

On last week’s show all hell broke loose on Traci’s first day as detective when a carload of young women from a bachelorette party slammed into another vehicle, apparently killing the driver.   When the police discover that the driver of the parked car was dead before the accident, Traci realized that her “rookie” handling of the car crash may have compromised the pending homicide investigation.

On tonight’s show Andy’s personal life turns upside-down when she answers a domestic disturbance call and the social worker on the scene turns out to be her long estranged mother, Claire, who abandoned her and her father 15 years ago. Now Andy must deal with her private issues as she works alongside her mother to investigate the secrets of a family in turmoil.

Meanwhile, Sam, Nick, Chris and Gail are in a race to find the desperate mother and her two children before she makes a tragic mistake. And Detective Jerry Barber’s badge may be on the line when a stash of guns he recovered ends up resurfacing on the streets

Tonight’s recap: Amy realizes she nearly forgot her fathers birthday so she rushes off to see him.  She arrives just as he was celebrating with his new girlfriend.  Awkward moment as she pauses then leaves.

Dev is back in uniform and back with the rest of the rookies after being suspended for awhile.  Andy goes to the scene of a domestic disturbance and finds a couple with two small children.  The father scolds his 11 year old son for calling the police. The boy named Connor goes inside and comes back outside and pulls a gun on everyone.  The police try to negotiate with him and a worker with children and youth shows up.  The worker is a woman named Clare that just so happens to be Andy’s long lost mother.  Things are icy between them at best.

Eventually the police get the gun and the children are forced to be taken from the mother and placed with family members. Andy makes a crack about how hard it is for most mothers to be away from their children. A stash of guns were found hidden in the sons room.  Eventually the mother is released but her children were placed in her sisters custody.

Andy and Clare have the inevitable conversation about how and why she walked away.  Or they try to until andy storms out.

The police are bound and determined to figure out where these guns came from.  The guy claims he was simply holding them for someone.  It doesn’t take long to figure out that Jerry seized the guns five years ago and he signed off on a waiver saying the guns were destroyed.  In other words, his badge is on the line because it looks like he falsified paperwork and then sold the weapons to gang bangers. He remembers the night the guns were taken in another office person told him he could go and they would check the guns in and see that they were destroyed.

A call comes in regarding the two children that were placed with family members.  They are missing after a visit from mom.  Her sister is beyond worried.  She explains that the kids parents have been caught in a cycle of drinking and fighting.. They find the car pretty quickly and Connor is hiding under the front seat.  He claims he drove it to the lake all by himself.

Traci chats up the woman who Jerry says resold the guns.  She believes she is lying through her teeth.  Connor finally tells Clare where his mother is hiding with the baby.  He says she‘s at his grandmother‘s house. Connor is allowed to see his dad at the police station and dad apologizes for messing everything up.

Andy decides to talk to Clare to get a little information.  Clare tells her she called every week to see if she could see her daughter and the answer was no. Andy‘s dad stood in the way of them having a relationship.  Clare asks if they can do dinner and Andy compromises and says she‘ll try coffee together..