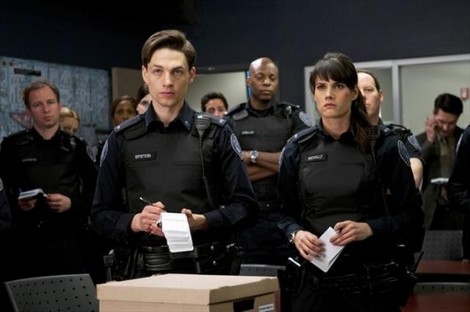 Tonight on ABC is an all new episode of Rookie Blue titled ‘I Never.’  Can you believe it is the season finale, another season finished so soon!  On tonight’s show a violent pedophile escapes during an emergency hospital visit and abducts a girl; Andy faces a serious decision; Chris considers a transfer.  If you missed last week’s show called ‘Every Man’, we have a full and detailed recap here for you.

On last week’s show weeks of trials and tribulations came to a head when the rookies of 15 Division were left on their own and a frenzied night in the station culminated in a prisoner pulling a gun on Chris in cells. The ensuing inquiry had Internal Affairs looking for someone to blame.

On tonight’s show when a violent child abductor escapes from an emergency hospital visit, the officers of 15 Division try to track him down before he takes another young victim. When Andy and Dov discover that the desperate man has snatched another girl, Andy and Swarek find themselves in a deadly standoff to save the terrified victim, resulting in a major emotional confrontation — and a serious choice for Andy.

Meanwhile, Chris’ family obligations have him contemplating a transfer, and Traci and Gail each face monumental decisions regarding their respective careers, on the Season Finale of “Rookie Blue,”

Tonight’s episode is going to be an exciting one that you won’t want to miss, so be sure to tune in for our live coverage ABC’s Rookie Blue tonight at 9 PM EST! While you wait for our recap hit the comments and let us know what you think of season 3 of Rookie Blue, so far! While you wait for the recap, you can checkout a sneak peek video of tonight’s episode tonight below!

Tonight’s finale: Mcnally is with her mom and she tries to convince her that she is over Swarek, but her mom thinks she is not over him, even though it has been a month and a half. Her mother goes on to tell her that she has her whole life a head of her and don’t be that girl that let’s a guy get in front of what she wants.

Meanwhile, Shaw is with Swarek and tells him that he has to lighten up.

At the station, McNally wants to get on the task force and tells Callaghan that she needs a change of scene, he tells her that he has a ton of applications and she is too late, then he offers the position to Nash.

Epstein and Mcnally are working together, they get a 911 call and have to look for a black van. It doesn’t take long for them to track it down, Mcnally finds a guard down who fell out of the van and when she turns him over she recognizes him, they get into a scuffle and he gets away. Meanwhile, Epstein is at the van and about to open one of the doors to find the other guard.

It turns out the guy who got away was John Gray, he was arrested months ago for kidnapping a child. Callaghan wants everyone looking for anything they can find out Gray.

Epstein and McNally head over to Alice’s house, she is the little girl that Gray previously abducted, McNally is worried that he is gone back after her because he was obsessed with her. When they arrive at her home, McNally finds a window open, in the middle of winter so she heads inside the house through the window with Epstein behind her.

McNally is confused, nobody is home and she thought Alice was home schooled.

At the station, Callaghan interviews one of the other guards who he thinks may have helped Gray escape. Nash gets a call, it’s from Epstein and he tells her that they are sure Gray was in the house. McNally tells Nash to look for a Dr. Kirijian, Alice was supposed to have an appointment there today.

Peck talks to Collins about her trip to Italy, but she tells him not to worry, that they are fine and she will miss him. He tells her that he will miss her too and plants a two kisses on her right inside station 15.

Swarek and Collins are interviewing a guy who was in jail with Gray, but he is not helping out. Collins goes on to tell the guy that Gray may have taken a child he was obsessed with. The guy spills everything he knows about Gray, including that the other guard most likely helped him for a price.

McNally arrives at Dr. Kirijian’s office and she has blood all over her face, Gray showed up at her office and told her that he would kill her if she didn’t tell him where Alice was. Alice’s grandfather re-scheduled the appointment, she wasn’t at the office, but Katie Spalding was and Gray took her.

According to Gray’s prison buddy, he has a bag full of goodies which includes money. Swarek gets a phone call, it’s Gray and he wants Alice, if they don’t find her in an hour he is going to kill Katie.

The alarm is going off at the McCleod house, Shaw is heading over to check it out with Diaz. When they get there, they find Alice hiding in a closet.

McNally and Epstein are checking the basement of a building for Gray and Katie, they seperate, McNally finds Katie and she has a grenade taped to her hand. Just as she approaches Katie, Gray pulls a gun on McNally and takes her away from Katie. Gray tells McNally that he needs to see Alice because he loves her,  Katie starts freaking out and McNally calms her down. Epstein can’t find McNally and calls it in. Gray takes McNally’s phone, he calls Swarek and tells him that if he talks to Alice for ten minutes he will let Katie go. Gray hears sirens and figures out that everyone is lying to him and takes off. McNally transfers the grenade to herself so Katie can go. Swarek arrives on the scene and is with McNally, Epstein runs after Gray and catches him.

Swarek is alone with McNally, he tells her that he loves her and holds the grenade with her. An officer from the bomb squad has arrived and tells McNally to calm down, he puts a pin in it and tells her to let go, she does and the bomb doesn’t go off.

Nash tells Callaghan that she advised Alice and her parents that Gray is behind bars. Callaghan tells Nash that the task force is getting together tonight, she needs to get going and won’t have time to say goodbye to anyone. Nash tells him she can’t just get up and leave so he tells her he understands, the task force is not for her.

Diaz tells Shaw that he wants to move to Timmins because Denise is going there and he wants to be with her and his kid, so he has applied for a transfer.

Swarek is alone with McNally in the change room and tells her that what he said before about being in love with her, it’s true. McNally doesn’t care anymore, he broke up with her in a parking lot and wouldn’t return her calls for six weeks, its too late. Swarek swears that he will do anything to prove to her that he loves her and he’s sorry. McNally is afraid to give him a chance, he asks her to just meet him at the bar and have a drink with him.

Callaghan calls McNally into a room and tells her that he will put her on the task force, but she has to leave right away, he needs her answer in five minutes.

Swarek gives Shaw advice in the dating world, he tells Swarek that Zoe called and wants to try again. Swarek tells him to go and try again, it’s worth it.

Callaghan is the car with McNally, she said yes, he is picking up her partner, it’s Collins.

McNally and Collins head out on their task force, they are not allowed to contact anyone while they are gone, not even family.