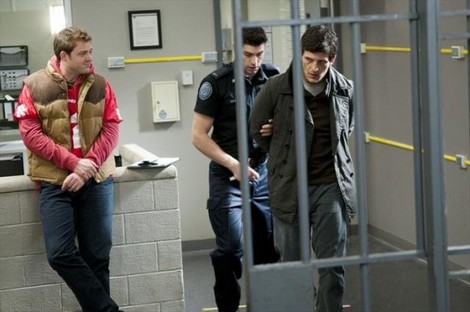 Tonight on ABC is an all new episode of Rookie Blue titled ‘Every Man.’  On tonight’s show weeks of trials and tribulations come to a head when the rookies of 15 Division are left on their own and a frenzied night in the station culminates in a prisoner pulling a gun on Chris in cells. The ensuing inquiry has Internal Affairs looking for someone to blame..  If you missed last week’s show called ‘The Rule’, we have a full and detailed recap here for you.

On last week’s episode when a death threat aimed at a local priest leds Andy and Nick to a neighborhood drug lord, the officers realized that they’re navigating a delicate war zone and that the priest may be hiding some surprising secrets of his own.

On tonight’s show Weeks of trials and tribulations come to a head when the rookies of 15 Division are left on their own and a frenzied night in the station culminates in a prisoner pulling a gun on Chris in cells. The ensuing inquiry has Internal Affairs looking for someone to blame.

With careers on the line, the rookies reflect on the personal and professional choices that have led each of them to that night’s events, walking a fine line between telling the truth and having each other’s backs. Meanwhile, Gail is still trying to recover from her harrowing abduction, Chris is blindsided by a personal revelation, and Andy learns a secret about Nick’s past.

Tonight’s episode: Careers are on the line tonight when something went down in a cell block in 15th division, officers Peck is the first one to be interviewed by Mills from SIU. Ten hours earlier, Peck was in the car with her father and he asks her if she has thought about taking time off because she has a hard year, she tells him no, she would rather be abducted again and he is not impressed. Peck arrives at the station with Epstein and Diaz. There is a task force being put together and Peck wants to get on it. Diaz arrives late to roll call and gets assigned to booking, Peck doesn’t tell the truth to Mills that he arrived late and that is why he was assigned booking.

At a game, a few guys get into a fight; Peck puts a suspect in her squad card, then goes to assist McNally and Epstein that required help. Mills asks her if she patted down the suspect, which is protocol, Peck says yes but she is lying.

Epstein is the next one to be interviewed by Mills, she wants to know about the time he took off recently, he tells it was because of a basketball injury and he is fine. He goes on to say that when he arrived at the station, Peck told him that she wanted to be on the task force. McNally told them not to disturb her; Frank approached Epstein and wants to know what happened to him. Frank goes on to tell him that it is twisted that he is dating the girl whose brother he shot. Mills starts to talk about the shooting, then they move on to the game where the two guys started fighting. Epstein wrestled a suspect to the ground and had to pepper spray him in the face to subdue him. When the suspect was brought to the station, Epstein claims that the guy tried to attack him when he went to take him out of the car, Epstein screamed across to Peck to take the guy before he kills him. Epstein was bleeding from the nose and had to put Peck’s suspect back in her car when he went to wash up.  Later, in the station,  Peck’s suspect has a gun, he is behind bars and he threatens to kill Epstein’s suspect who is in the cell with him.

McNally is up, her turn to be interviewed by Mills who tells her that she knows her father. McNally tells her that she was in about an hour before roll call to go to the gym and clear her head. She meets Collins outside, it is 8am and he is drunk. She leaves him in a room and meets Epstein, Peck and Diaz just when they arrive at the station. She takes a muffin and coffee from Diaz and brings it back to the room to Collins.  Mills asks McNally about her relationship with Swarek, McNally tells her it is over. McNally recounts what happened at the game, she clams she took one suspect, cuffed him and put him in her car. Back at the station, she brought him to booking and Diasz brings his suspect in right behind hers. McNally leaves the booking area to go check on Collins when she gets a call that something is happening at booking.

Diaz is the last on to be interviewed, he starts at the beginning. He is in the car and tells Epstein that he needs to be on the task force that Luke is putting together. Diaz was called to reception as soon as he arrived at the station, it was Denise who he hadn’t seen in three years. She tells Diaz that her son, Christian, is his son just as Frank walks in the room and calls him. Diaz leaves her there and heads to roll call and he’s late so Frank tells him that he just volunteered to work in booking. Diaz got a phone call from Denise just as McNally arrived with her suspect, she asks Diaz to process her guy so she can go check on Collins. Frank walks in with Epstein’s suspect and tells Diaz to take care of him if Epstein is not there. Epstein finally arrives in booking, just when his suspect pulls a gun and he is in a cell with another suspect who is threatening. Diaz tells her that it’s not his fault that the other officers didn’t pat down the suspect before they arrested him. Frank is also on the scene now, but the guy with the gun only wanted to talk to Diaz.

The suspect with the gun wants Diaz to open the door, but first Diaz wants one suspect released. The guys name is Eliiott, the suspect he is threatening to shoot is Rob. Elliott tells Diaz that he was in prison for five years and can’t go back, the lights start to go off and when Elliott gets uptset, Diaz tells him to calm down. Diaz has a cell phone on his desk, he offers dial the number for Elliott when he is taken out by another officer, shot dead.

Mills tells Diaz that there is no question that he acted bravely, but it is how he got there that was the greater issue. Mills asks him if he thinks he was distracted or lost control of the situation. Mills then calls Frank up and tells Diaz that they are done.

Diaz walks out and tells everyone that he is going to lose his badge, everyone else feels the same way. Frank backs up his officers and when Mills brings his personal life into it, he tells her it is none of her business. Peck comes into the room and tells Mills that she did not pat her suspect down and it is all her fault.

Frank tells the rest of them to go home, he will call them later when he has word of a decision.

McNally leaves the station and Swarek is still there – he wanted to make sure she was ok. Diaz is leaving the station and tells Epstein about the baby and that it could be his.

Mcnally goes for drinks and meets Collins who is having a soda, she asks him what it is that made him show up drunk. He tells her that once a year he does this to remember a friend who died. They go over to sit with Swarek and Nash. Peck arrives at the bar announces that SIU is going after her badge.