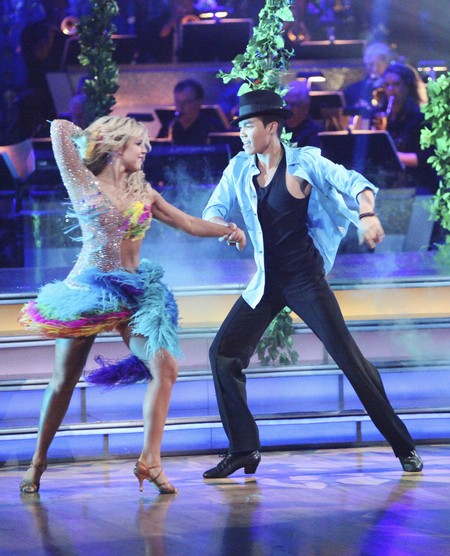 ROUND – 2 Roshon Fegan danced the Paso Doble tonight for her trio dance as Dancing With The Stars continued with its eighth episode. The competition is really heating up as the remaining six couples hit the ballroom tonight with two rounds of competitive dance performances, a ballroom dance and the Trio dance — both of which will be a style that they’ve not yet performed.  We recapped the tonight’s show for you and if you want to see how all the couples did go HERE!  Did you see Roshon’s performance last week if you missed it you can see it here!

Roshon Fegan and professional dancer Chelsie Hightower, dancing the, Paso Doble – Chelsie had this to say about their dance this week, “We’re doing something next week called the trio.  Basically we choose one professional dancer that’s been eliminated already, or on the troupe, to be in our number with us. And we have the Paso Doble so I’m kind of excited. I think it’s going to be fun.”

Judges Comments:  Bruno: You had strengthen you had style you had artistry! Beautiful! There were moments I couldn’t distinguish between the two of you. You lost it a few times. But good job.  Carrie Ann:  I am so conflicted because it was such a good routine. But you went off  Len: you were like two skinny fries chasing the catchup. Lovely powerful lines beautiful. Great job. Well done!

Watch the video below and let us know what you think? Do you think that Roshon did enough to keep him around for another week? Sound out in the comments below!