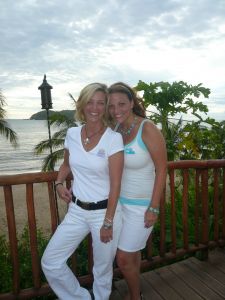 It seems that if one ex can rebound and get married quickly then the other has to follow suit. Rosie O’Donnell recently married Michelle Rounds in June and now her ex-wife, Kelli Carpenter, is taking the plunge again.

The only difference this time around is that Carpenter is taking her time since her big day wont happen until June 1, 2013. According to Confidenti@l, her fiancé is cabaret singer Anne Steele. “We’re going to have a picnic barbecue backyard wedding” in Rockland County, the co-founder of R Family Vacations tells Confidenti@l, adding that the newly engaged couple is “keeping it family-friendly and small,” since they want Carpenter’s four children with O’Donnell to participate.

Carpenter and O’Donnell share custody of their children, Parker, Chelsea, Blake and Vivienne from their five year union so let’s hope it’s amicable for everyone involved. I have a feeling that even though O’Donnell has remarried she must have a ting of pain going through her body since she comes off as the jealous type, but I could be wrong. O’Donnell did Piers Morgan back in January that she didn’t know if it “would feel right for either of us [for Carpenter to be at Rosie’s wedding] and the same when she and Anne get married. I don’t think it would be right for me to be there.”

No matter what race, gender, class, age (legal of course), it’s important that everyone gets treated with the same kind of respect as everyone else. I’m happy that these two are finding love again and moving on, especially with their own children involved and the media around them still. As long as everyone is happy and being amicable for the sake of the kids, that’s all that really matters and it seems that is what’s happening.