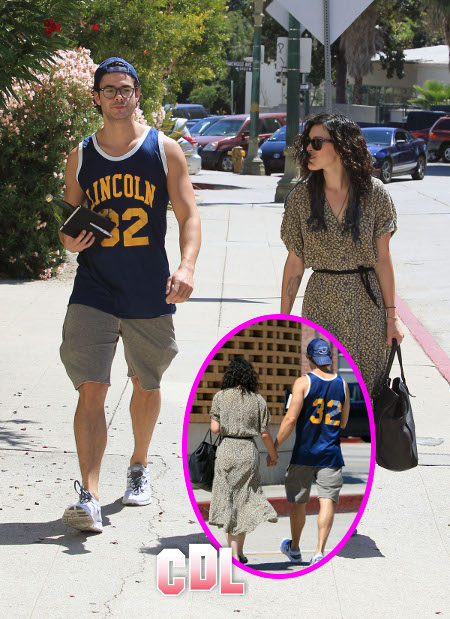 It looks like Rumer Willis is adding a little spice to her life with new boyfriend Jayson Blair. The two were spotted strolling through L.A. the other day, holding hands, and — wait for it — smiling at each other! Normally, I’d say that people are just overreacting, that you can’t base a budding relationship on a Hollywood smile (or can we?), but these two really do appear as if they are an item — or at least the product of a quirky summer fling. They’ve been doing lots of things together recently, and Jayson has even been tweeting about her.

“Sneaking my Baby’s babies some chicken. Don’t tell momma,” he tweeted the other day alongside a picture of Rumer’s dogs. Rumer Willis’ boyfriend is also an actor. He’s primarily known for his role as the bully on the MTV show The Hard Times of RJ Berger.

It’s nice to see a smile on Rumer’s face, especially after her mother Demi Moore checked out out of rehab. Rumer hasn’t made much contact with her mother over the past months. There’s definitely a gap in her life so it’s nice to see that Rumer has someone that she cares about and who, so it seems, also cares for her.

Rumer Willis’ boyfriend is 28 and Rumer is 23. We’re interested to see where this blossoming relationship goes. Do you think they’re a good Hollywood couple? Would you like to see them stay in it to win it? Don’t forget to check out some of the pictures we have for you below!