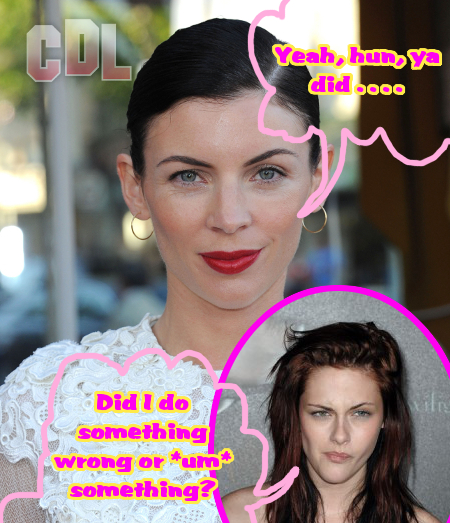 Liberty Ross, the jilted wife of director Rupert Sanders, is saying no to the Snow White and the Huntsman sequel. She put her foot down and said that if they are to work out their marriage, after his cheating ways, then he’ll stay away from that film and Kristen Stewart. Sanders, who directed the first film, recently admitted to having an affair with Kristen, the film’s star.

To say that I’m not surprised Ross is putting her foot down on this one is an understatement. If they even have a chance of working it out (which is still a big maybe), no woman in her right mind would allow her cheating husband to direct the woman with whom he cheated on.

Sanders, 41, and Kristen, 22, were ousted last week for their ‘indiscretions’, leading to a media frenzy and ultimately disappointing every Twilight fan out there (KStew’s boyfriend Robert Pattinson has moved out of the couple’s love nest).

The director was all set and ready to direct the sequel after the first film was such a success. However, Universal Pictures is considering going with another director for obvious reasons. What an idiot for not only jeopardizing his marriage, but his career as well. And what does this mean for Kristen? Surely changing the director isn’t as bad as changing the female lead. But will Kristen be able to commit? Her star power has declined in my books, I don’t know if I can look at her the same to be honest…cheating adulteress that she is.

According to Radaronline, a source had these things to say:

“Liberty let it be known in no uncertain terms that Rupert can’t direct the sequel to Snow White and the Huntsman. They are trying to work things out after he was caught having an affair, and that is one of the sticking points. She just doesn’t want him to ever work with Kristen again.

Rupert is obviously disappointed because Snow White and the Huntsman was his directorial debut, and he had hoped on building on that with a follow-up after some decent reviews. But he knows his actions were inexcusable, and he’s going to have to bite the bullet and listen to his wife on this one.

“Also, when Rupert signed up for Snow White and the Huntsman, he didn’t know he was going to get a chance to direct a sequel. His contract with Universal was only for one movie. It was a verbal agreement that he was to take the reigns on the sequel, nothing was ever signed. Kristen, as the film’s lead, will get preference over Rupert and Universal will just find another director.”

Well there you have it. I’m ok with never seeing his face again … don’t know about y’all?