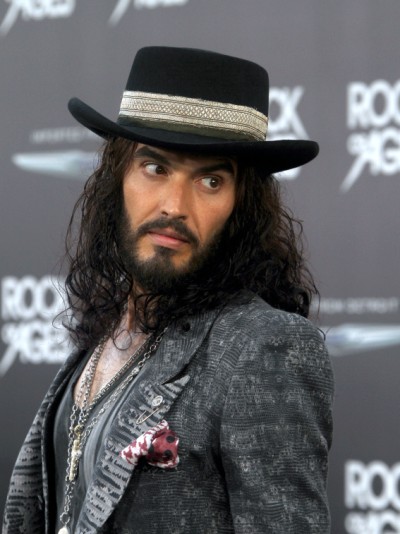 Word to the wise for talk show hosts out there, don’t bring up Katy Perry when interviewing Russell Brand anymore. Graham Norton got a tongue-lashing from the comedian when his question about Russell’s 14-month marriage to the pop star left Russell’s mom in tears.

According to The Mirror Russell fumed, “My mum is here. She got upset earlier when you dragged up my marriage. I saw her cry. That’s reality because it’s real people, Graham, that’s my real mum. That’s why I was a little bit embarrassed when I saw my mum crying. I came here to promote a film and you made my mum cry. I don’t see you as that sort of person, Graham.”

Russell didn’t stop there. The Rock of Ages star went on to tell fellow guests Emily Blunt and Paloma Faith that Graham “upped the stakes and stabbed me in the back.”

To be fair, Russell wasn’t just throwing a celebrity style hissy fit. He was just saying Graham should have told him he was going to ask about the failed marriage before the cameras started rolling, especially since Katy had just been on the show days before. “What I would have done mate is come up to me before the show and gone: ‘Eh, listen. It’s a bit odd that your ex-missus was on last week. I might mention it. Is that OK?’ And I would have gone: ‘Of course it is.’ But in all of the chatting and the research, no-one mentioned it.”

It’s not like Russell hasn’t talked about Katy while on the press tour for Rock of Ages. He let Ellen Degeneres ask questions and recently told the UK’s Lorraine show that, “She is a person that I love, but now this is a new time.” So his divorce hasn’t been a taboo subject. It’s actually odd to see Russell lose his cool like this and a little sad. Can you imagine getting divorced and then having everyone you meet ask for the details constantly? That’s got to be annoying. But Russell did put himself out there. He was very vocal about the relationship when he and Katy were together. Say what you want about Gwyneth Paltrow and Chris Martin always going to ridiculous lengths not to be seen together, but that behavior has its advantages in times like these. Once you open Pandora’s box and talk about your celebrity significant other to the media, it is always going to think it can ask you about them.

Should reporters give Russell a break and stop harping on Katy or should the funnyman just deal with it since he’s using the publicity to promote his new movie?