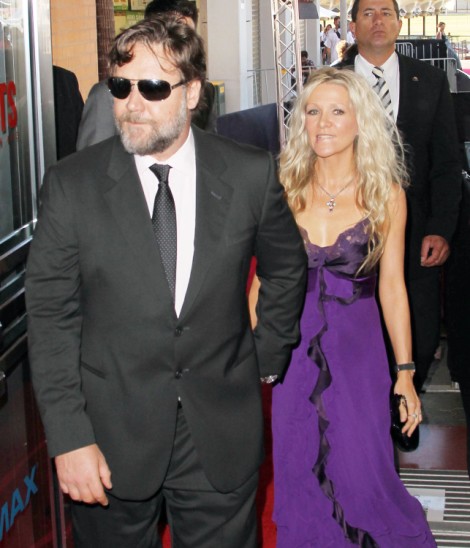 Has someone hid all the phones? Yes? OK then, let’s start the story. Russell Crowe has split from his wife of nine years, Danielle Spencer. Russell married the Australian beauty in 2003 and maintained a pretty subdued and relaxed relationship despite all the publicity. A lot of that had to do with the fact that Russell got fat so no one cared about his love life anymore and also because he raised his family with Danielle, which includes two sons, down under away from the paparazzi.

The Sydney Morning Herald reports that Russell’s hectic working schedule is the cause of the break up but the rise of work could have also been the result of the marriage problems in the first place. “But apart from that – and his quick return trip home for the Souths rugby league semi-final – Crowe has been mostly overseas this year, working on films. Spencer has been in Australia, caring for her sons, who attend school in Sydney. The actor has had one of the busiest periods of his filming career, though, making back to back movies overseas. He has seven films coming out in the next year: Man with the Iron Fist, Les Miserables, Broken City, Superman, Noah and his next project The Winter’s Tale, with Colin Farrell and Will Smith.”

I’m actually super surprised by Russell Crowe.  Splits are the worst but not too long ago pictures came out of Russell meeting his family at the airport and they seemed genuinely happy to see each other. He even kissed his wife which I thought was cute at the time. Oh, silly Jeanne! People are now saying that PDA was damage control because Danielle was spotted out to dinner with a man who wasn’t her husband. Who cheats on the Gladiator! Well, it’s probably easy when he spends most of his time on the other side of the planet.

Side not: does this explain the lost at sea episode? Last month Russell and his friend had to get rescued by the Coast Guard after getting lost kayaking on the Long Island Sound. Was that a metaphor for life and we just didn’t pick up on it?

Are you surprised by Russell Crowe’s separation from Danielle?