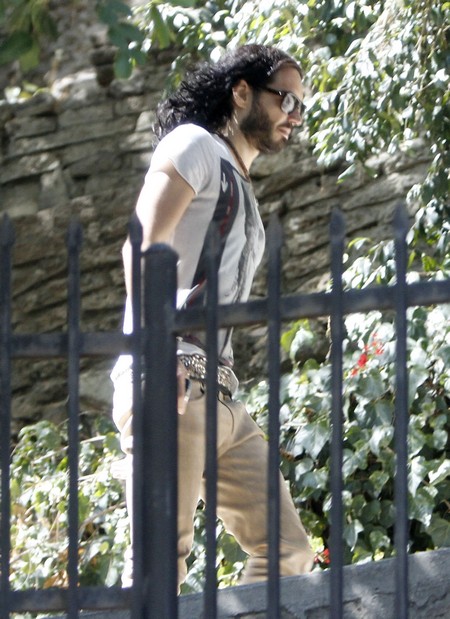 Sarah Palin hides the bodies of left wingers in the Alaskan ice after she shoots them with a sniper rifle. Every kill results in Palin muttering under her breath, ‘Fudging hobo hippie, gosh darn it, look at what you made me do!‘ There aren’t many people in Hollywood who agree with Palin’s view of politics and her outspoken conservative nature, but one aspect is true, she grabs the headlines quicker than one of Charlie Sheen’s hookers. Enter Russell Brand, without shoes or manners.

Brand explained to critics on Saturday how his talk show, “Brand X,” will become more conventional, but the conversation quickly shifted to Palin’s popular appeal and how he presumes people would like to fornicate with her, like that naughty nightmare you had about Condoleezza Rice and sushi rice…

He said to the critics he believes her appeal is that “People want to f*** her. That’s why they tolerate the other stuff.” Russell, if you want to get it on like Borat with Palin, be our guest. Your only chance at not succeeding would be the double barrel shotgun and horrible politics staring you in the face.

Brand was bare footed at the critics meeting and after someone asked where his shoes were, he said, “They’re home with their stepmom. The real question is, why are you all wearing shoes?”

Brand not only asked one of the most rhetorical questions in human history, but he also said that comedians should feel free to say what they want to. “I don’t think we should create a state where people are afraid to talk,” he said. “That could have much worse consequences.” There’s no word yet on whether the poor shoeless Brand lost his feet to frostbite and Palin’s Misery re-enactment, but we’ll definitely keep you updated on that and the whole freedom of speech thing, you know?

In other news, Palin fired a warning shot at a naked woman, but only later realized that it was a mannequin trying to look cool. She blamed the hippies and Russell Brand’s sexual deviancy.