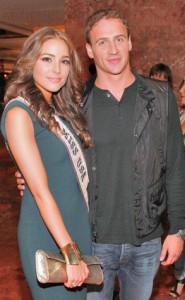 Is Ryan Lochte’s girlfriend Miss USA Olivia Culpo? Well if they are not yet “official”, they do have a lot in common to where a possible relationship could be in the cards. Heck, both Ryan and Olivia have had to compete against the best and won, but could they be engaging in a romance to become a power couple? Well, his crush Blake Lively obviously didn’t work out, so perhaps this is more of an attainable goal?

Well, relationship or not, it sure appears as if Lochte is enjoying his post Olympics freedom. During Mercedes-Benz Fashion Week, Lochte was able to hang out a little bit with the 20 year old Rhode Island beauty and now he is publicly sharing his thoughts about her. Lochte told E! News, “She is beautiful. I love hanging out with her. She has a great sense of humor. She makes me laugh. She’s just a good girl to hang out with.”

Culpo wants to make one thing clear though. She IS single and ready to mingle and she wants everyone to know that her and Ryan are JUST friends. The beauty told the New York Post, “People make up things when they see people together.”

Even though Ryan may be enamored with Culpo’s beauty, he is very impressed with her drive to win. He told E!, “She was telling me yesterday how she never did a pageant until like a year ago. And all of a sudden she’s Miss USA now. She’s got something!” Whether what she has is something that he REALLY wants remains to be seen. As for Ryan Lochte’s girlfriend? Miss USA Olivia Culpo could be it, just not at this moment…unless they are trying to keep things on the down low for a hot minute.