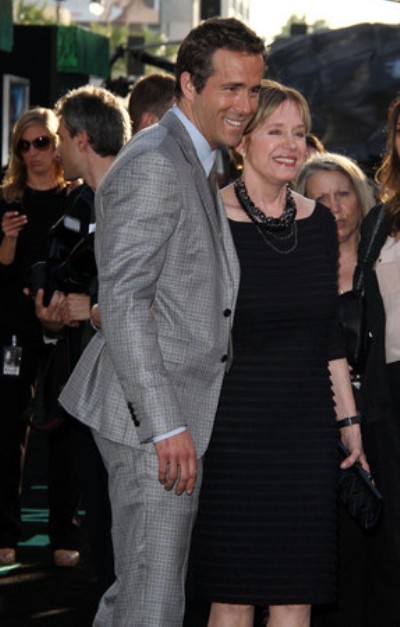 Blake Lively and Ryan Reynolds may be shacking up but if Ryan’s mom has anything to say about it, that’s as far as the couple will get. Star magazine print edition reports that at the couple’s last visit to Ryan’s hometown tensions between his “straight-talking” mother and girlfriend came to a head.

“She hasn’t really warmed to Blake,” a source told the magazine. “Tammy would like to see Ryan with a woman who’s not in the movie business because she feels that, ultimately, actresses put their careers first. And she thinks Blake is pressuring Ryan into settling down before he’s ready. He also rushed into his first marriage, with Scarlett Johansson.”

Tammy might not want the adorable couple to rush into anything but that’s not stopping her from dreaming about Canadian grandchildren.

“She says when they have kids, Blake and Ryan should raise them in Canada because it’s safer,” says the source. “Blake refuses to even consider that, saying that she has to be in NYC for work.”

But the arguments didn’t stop there. Tammy might not want them to rush into anything but that’s not stopping her from planning a wedding. “She wants to invite all these family friends Blake doesn’t know. When Tammy started grilling her, Blake left the room and had a meltdown… she told Ryan she wanted to stay at a hotel for the rest of the trip,” the source snitched.

If any of this is remotely true then Ryan’s mom needs to step off Blake and stop holding her accountable for Scarlett’s mistakes. Yes, Hollywood actresses put their careers first. Yes, Blake is young but Ryan is a grown man and I don’t think he would have let himself be pressured into moving in and possibly marrying Blake unless he wanted to. I think Blake’s made great concessions so far that show her as the good, caring girlfriend she is. She ditched the MET gala this year to hang with Ryan and agreed to buy a house in Bedford. Bedford. That’s not Hollywood, heck that’s not even New York City. It’s Bedford and very undiva-like.

I think Mama Reynolds is probably overprotective of Ryan since his heart was broken so badly from Scarlett and now she’s making silly wedding/baby demands. Blake needs to be cool. There’s no winning for anyone if the mom and the wife don’t get along. She needs to take a deep breath, bake some cookies, try not to look so intimidatingly beautiful and play nice. She and Ryan have only been together for like seven months. She needs to give Tammy time to warm to her. Once she realizes she’s the real deal, if she’s the real deal, then Tammy will cool her jets. Don’t you think?