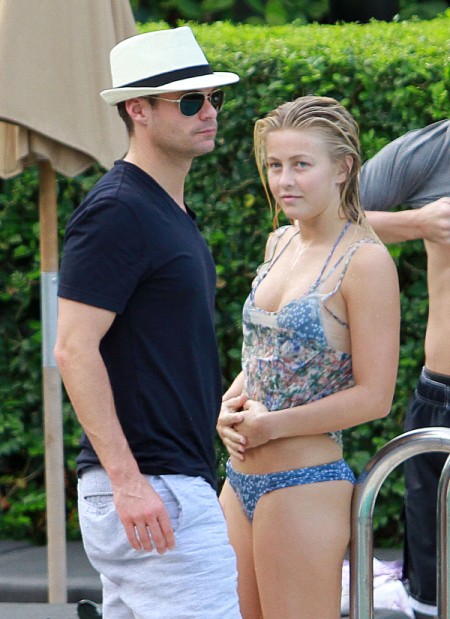 Micro-manager Ryan Seacrest is ordering his much younger girlfriend, Julianne Hough to quit her burgeoning acting career because he thinks two careers is one too many in a relationship.

Now, to give Ryan some credit, it’s not like Julianne’s movie duds like Rock of Ages and Footloose have directors calling her off the hook, but at least she’s trying! Who knew Seacrest was so old-fashioned?

“Ryan wants a family, and he keeps reminding Julianne that he makes more than enough money to support them both,” an insider told the National Enquirer. “He said there’s only room for one workaholic in the family. Julianne is torn – she’s desperate to marry, but she’s one of the most in-demand talents in Hollywood right now.”

First of all, why is a 23-year-old “desperate to marry”? And “most in-demand talents”? Come on, she’s cute and has a hot body. Her acting is subpar. But subpar actresses make really good wives, I guess. Look at Phoebe Cates who threw away her  fame to marry Kevin Kline, they’ve been married for 23 years. And Catherine Zeta Jones has cooled her jets since marrying Michael Douglas. They’ve been together for 12 years. What do all these women have in common? Men with large egos… and successful relationships.

I have no problem with Julianne sitting at home and having chillin’ if that’s what she wants to do, but she’s got to be careful. She’s only 23, which means in a couple years she could be prime for the Real Housewives of Beverly Hills. Does she want to leave her hot career behind for that? Ya, Ryan’s got money and a long career ahead of him, but Julianne’s ass is only going to be that perky once in her life. She needs to capitalize now. Hollywood isn’t that kind to women who think they can make comebacks. Just ask Gwyneth Paltrow. She’s not exactly getting Kate Winlset-type offers ever since she got all Goopy.

Do you agree with Ryan that two workaholics is too much for a relationship to survive in Hollywood or do you think Julianne should try to balance as much as she can while she can?