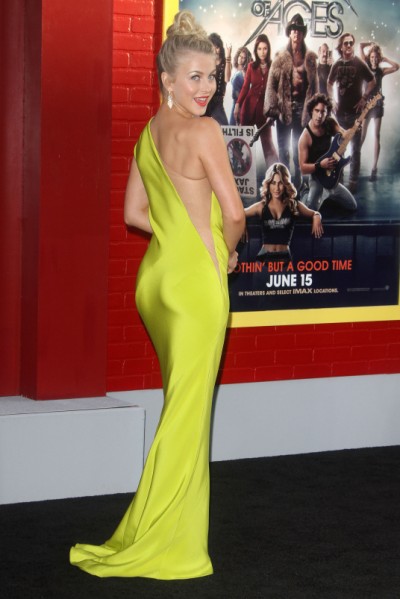 Rock of Ages star, Julianne Hough said she initially didn’t want to ride on the Ryan Seacrest because he was too “old” and “scary” for her.

Can you believe she’s 23? For some reason she seems older to me, maybe it’s all the make-up. And he’s 14 years older! That’s a big difference. It’s not a big difference when your Michael Douglas and Catherine Zeta-Jones’s ages but, at 23, that’s a big age difference so I totally get why she told Ryan and his frosted tips to scram when they first started sniffing around two years ago.

“I’ve never dated anyone my age but Ryan is definitely the oldest man I’ve dated. Age is irrelevant I think,” she said, according to Showbizspy. “Mutual friends would be like, ‘You guys would match perfectly.’ And then eventually when I was single, he emailed me. I was very cold. I was nervous about dating him because he is a very scary person. He’s powerful and influential. I was like, ‘No, no, no’ but it just ended up happening. Our inside joke is that we have to schedule scheduling hanging out. But it somehow works.”

Ya, your friends said you’d be perfect together because he’s rich and your hot. Case closed. How perfect could a 21-year-old Mormon and a 35-year-old reality host be? Especially when Julianne might be saving herself for marriage? Exactly, what? In the interview, she reveals her strict Mormon upbringing saying, “We learned about being humble, thoughtful and grateful, always to see the good in people. No sex before marriage, no drinking alcohol, no drugs, no dating before you are 16, pornography is not good. The thinking is there are certain things that pollute your mind, that aren’t giving you great direction. I still try to be a good person — yeah, I like a glass of wine with dinner and I don’t think there is anything wrong with that. I think a lot of rules are to guide and protect people from going too far, I know where my limit is — everything in moderation.”

So are they or aren’t they? I’d have to think they’d have been engaged awhile ago if she was making the Seacrest wait.

Can you see Ryan pursuing a girl? I’m not going to lie, up until he started kicking it with Julianne I just thought he was gay. And trust, I was not alone in that assumption. But I can’t help myself, I like this couple. Her hotness doesn’t offend me. They don’t hide from the cameras making spectacles of themselves, but they don’t lunch together at the Ivy every day either. They have a Tom Hanks/Rita Wilson dynamic of being celebrities who don’t elicit too much attention. It’s the best of both worlds.

That could change soon though. Early reviews of Rock of Ages are looking good and Julianne is set to blow up. Do you think Ryan’s the proud, encouraging type or is this “old” and “scary” dude going to feel challenged by Julianne’s rising success?