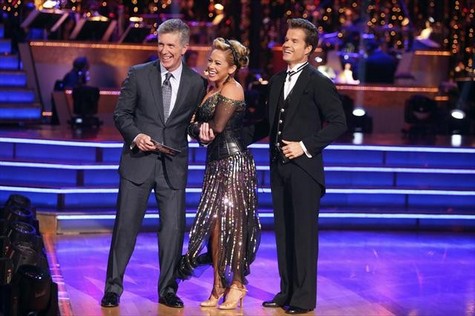 Sabrina Bryan danced the Foxtrot for her reinterpretation of an iconic dance on DWTS.  Sabrina and Louis chose to recreate Mel B & Maks’ season 5 paso doble on Dancing With The Stars All-Stars 2012 Season 15 tonight.  All the 11 remaining couples hit the stage tonight to reinterpret an iconic “DWTS” dance and face a double elimination on this week’s Dancing With The Stars.   If you missed the show, we recapped tonight’s show for you and if you want to see how all the couples did go HERE!

Sabrina Bryan and and professional dancer Louis van Amstel, dancing the Paso Doble.  Louis said this about the dance, “It’s exciting and yet more pressure.  The Iconic Dance is we choose one of the dances that has been done in the past 14 seasons but it has to be iconic. So either it had three 10s or there was such sentimental value, but the one we chose has both. Whoever did it had three 10s and it was very sentimental to Sabrina. It’s literally iconic to Dancing With the Stars.”

Judges’ Comments:  Len: “It was full of risks, full of great technique, a fabulous routine.”  Bruno: “Maximum fire power, a touch of scary spice, you really are a great dancer.”  Carrie Ann:  “It was about the creative concept and I don’t feel like you brought us anything new, it was still outstanding dancing.”

Watch the video below and let us know what you think? Do you Sabrina did enough to win the Mirror Ball Trophy? Sound out in the comments below!