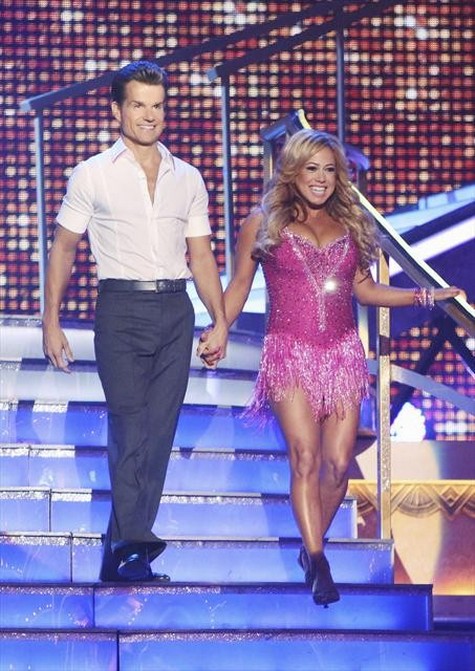 Sabrina Bryan danced the Quickstep to Black Betty by Ram Jam for her performance tonight on Dancing With The Stars All-Stars 2012 Season 15.  All 12 couples hit the stage performing either the Jive or the Quickstep to impress the judges and viewers at home, hoping they’re not the first couple sent home.   We recapped the tonight’s show for you and if you want to see how all the couples did go HERE!

Sabrina Bryan and professional dancer Louis van Amstel dancing Quickstep.  Sabrina had this to say about her quickstep, “It’s not a good feeling to know that I have a Quickstep that’s fast. “But it makes more sense to me. .. He always talks about light and shade, big and small. Things like that. That makes more sense to me. I don’t know if it’s just years of watching the show since I’ve done it, or the way Louis’ explained it to me, or whatever it is. I really get it this time. Louis’ really good about pulling out exactly what I need to do.”

Judges Comments: Len: “This season the hits keep on coming, you kept all your upper body under control and worked your legs, a graet Quick Step.”  Bruno: “OMG, is it Miss Ginger Rogers, your variations and lines were superb, a true dazzler.”  Carrie Ann:  “Your top line is something I have never seen before, you had grace and drama, you were awesome.”

Watch the video below and let us know what you think? Do you think Sabrina did enough to win the Mirror Ball Trophy? Sound out in the comments below!