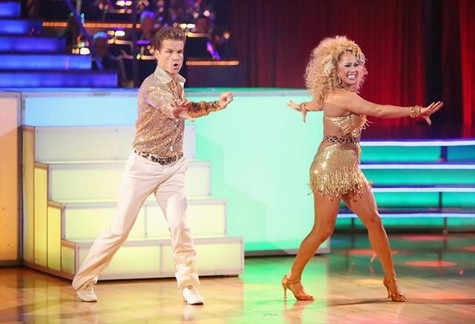 Sabrina Bryan danced the Waltz for her dance on DWTS Guilty Pleasures Week.  Sabrina and Louis chose to dance their waltz to her guilty pleasure song “So This Is Love” by Disney on Dancing With The Stars All-Stars 2012 Season 15 tonight.  If you missed the show, we recapped tonight’s show for you and if you want to see how all the couples did go HERE!

Sabrina Bryan and professional dancer Louis Van Amstel, dancing the Waltz.   Sabrina had this to say about their performance, “Next week it’ll be a totally different vibe.  We’re getting to do a style I have never done on the show before. I’m getting to really be just elegant and I know — after the Quickstep, what [Louis] did with me then — next week’s it’s going to be like just incredible.”

Judges’ Comments: Len: “I love the story, it had a beginning, a middle and an end.  It was such a charming number!” Bruno: “It was like a magic ride into an enchanted kingdom.  You went for it.  It fit the show.  Delicious, careful with your shoulders, I loved it! ” Carrie Ann: “I know you were going for vulnerability and you did not get it.  It was light and gorgeous and I think you are in for a happy ending.”

Watch the video below and let us know what you think of Sabrina’s performance? Do you think Sabrina did enough to keep her around next week? Sound out in the comments below!