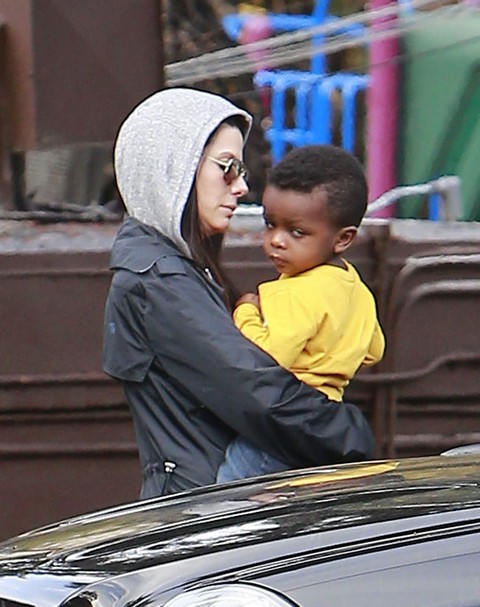 White supremacist Jesse James has had a notoriously shady love life. The man has no respect for anyone but himself, but has found someone who apparently likes that about him. He’s gotten engaged to drag racer Alexis DeJoria, which, if it actually happens, will be his fourth wedding! You’d think that Sandra Bullock would feel relieved to have escaped the creep’s clutches, but a family friend paints a very different picture. “On the outside, Sandra is trying to remain calm. But inside, she’s crumbling. Sandra’s devastated that Jesse has been engaged twice since they broke up and she doesn’t even have a man in her life, except for her little boy Louis.”

So why is Sandra so affected by what her Nazi supporting ex is up to? The source explains that it has nothing to do with wanting Jesse back, but it’s hard to see such a scum of a person find happiness! “She was so hurt by Jesse, she’s been afraid to let someone get close to her.” It’s a common break up feeling: why aren’t you more upset to have lost me? Why doesn’t it hurt you as much as it hurts me? The source says that Sandra is working on it though, and has “been seeing a therapist three times a week for almost two years. She’s still grappling with trust issues involving men but she says she’s making progress and slowly learning to truly open her heart again and let love in.”

National Enquirer reports that the news has completely crushed Sandra, despite her therapy sessions and adopted son Louis. “Sandy’s so guarded when it comes to love that she hasn’t really been able to allow herself the freedom to enjoy romance,” their source explained. “Sandra’s tired of seeing everyone else settled down. She wants to find her Mr. Right—and soon.”  We don’t know why she’s putting so much pressure on this engagement. Even if they do get married, it won’t last! Jesse is the scum of the earth and treats his partners like shit—if Alexis has two brain cells to rub together, she’ll leave him. Sandra has an Oscar on her mantle, a great smile, and gorgeous little son. We think she needs to finally let go of the Jesse baggage and learn to be happy single. Then she can try a new relationship!