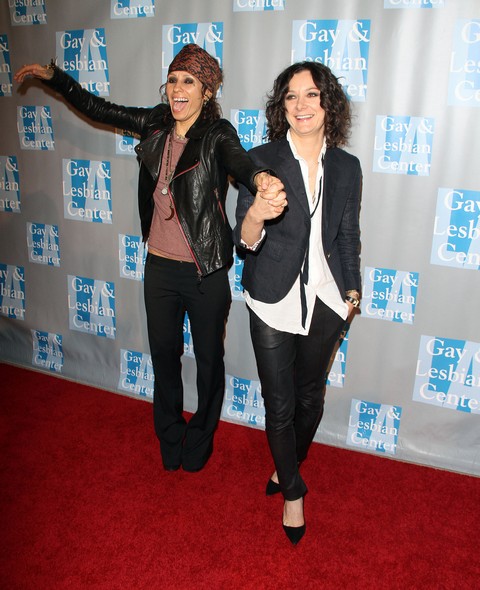 A man-crush is a once in a lifetime event for gay women. It’s a rare and telling experience, almost like an asteroid that misses the Earth by a few miles. The era of oppressive labeling and sexual identity has been done away with, and men and women of all ages, creeds, and sexual orientations are free to express themselves openly and without judgment. The boxed-in days of “if you are this way, you should act this way” have since been replaced by universal equality, compassion, and opportunity. One such woman, Sara Gilbert, the openly gay creator and co-host of “The Talk”, has revealed who her famous man-crush is, but before you click your tongue and roll your eyes, hear us our first!

Rosie O’Donnell was one of the first gay ladies to famously swoon over Scientologist and creepy man extraordinaire, Tom Cruise. Soon after, the viscious and acerbic Sue Sylvester – known locally as Jane Lynch – opened up about her man-crush on Ron Howard. However, Gilbert does not fall into any of the above categories. She doesn’t go for the opulent directors and film stars of Hollywood’s elite; she instead crushes like a school girl on country music legend Toby Keith – this, as reported on by Mike Walker at The National Enquirer. An insider revealed, “When Toby guested on the show, Sara couldn’t keep her eyes off him. She was mesmerized by him, and it didn’t go unnoticed. Now when anyone mentions Toby’s name to her, Sara blushes like a schoolgirl.” Aww, ain’t that as sweet mama’s Strawberry pie!

Gilbert has been dating musician Linda Perry since 2011 and has been a powerful force in the LGBT community. Her man-crush is a light hearted reprieve from the usual Hollywood Horror (read: Kris Jenner and her gaggle of Kardashian bitches) and shouldn’t be taken to heart. However, we are unsure what the 51-year-old Toby Keith had to say about his schoolgirl experience on television’s hottest talk show.

Luckily, Gilbert doesn’t allow societal norms to box her in and create a caricature of her. There’s an extremely thin line that is tread when stories like these make their way to our inbox, but fortunately stars like Gilbert, O’Donnel, and Lynch take it in their celebrity stride.

What do you think? Would you also crush on Toby Keith? Let us know your thoughts in the comments below.