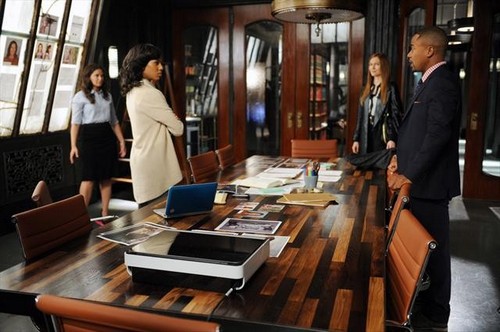 Tonight on ABC is a whole new episode of SCANDAL called “All Roads Lead to Fitz.” When the wife of a governor is raped, the governor takes the law into his own hands and then asks Olivia and her team to come in and clean up his mess. We watched it and we recapped it here for you!

On last week’s show called a DC college student went missing and her grieving parents came to Pope & Associates for help. Meanwhile David was still investigating the Cytron case and got help from a very surprising source; and in the White House, Fitz felt the pressure as Mellie proved once again that she’s a political powerhouse.

On tonight’s show when the wife of a governor is raped, the governor takes the law into his own hands and then asks Olivia and her team to come in and clean up his mess. Meanwhile, both Cyrus and the President are caught off-guard when Cyrus’ husband, James, decides to return to his career as a journalist covering the White House.

Tonight’s episode looks like it is going to be a great episode and you won’t want to miss it, so be sure to tune in for our live coverage of ABC’s “Scandal” Season 2 episode 5 at 10 PM EST!

David Rosen is creating a serious problem for everyone and by everyone I mean Fitz, his handlers, his bitch wife Mellie, Liv and basically all of the other key players in this show.  Liv says that she’ll handle it and I’m thinking she better because she’s the only calm one in the bunch. Huck is at one of his AA meetings and finds himself blatantly hit on by some crazy chick who all but shoves her number down his throat.

Govenor Reston is at the center of this episode. He came home to find a man raping his wife so he fired two shots into the guy. He says he knew the man, that he had been working on the house. Liv tells  him to do as she tells him and not to assume anything. She starts helping him to craft a statement to feed to the press. Something basic and she demands that they give it 24 hours to see how things play out before they plan a full strategy.

As Olivia starts doing her footwork red flags are popping up. The worker had several lengthy phone calls with the governor and the gun was a recent purchase.  Reston says he spent four years tracking down that gun and that the calls were to a crappy contractor that was gauging him. It’s not a recipe for murder.  Liv starts ripping apart the contractors history trying to piece the mess that she has been handed together.

Abby turns up the contractors hair all over the house. They realize that Joan was not raped but was in fact having an affair all over the house until her husband walked in and caught her. Then she cried rape.  The governor flips out as his wife cries. His wife is sent home as Olivia and Reston talk strategy. If anyone realizes his wife was having an affair he is screwed.

David has officially been offered his old job back and everyone is hoping he takes it and gets distracted. Otherwise he is on the fast track to discovering some pretty big secrets about the top echelon of the US government.

Cyrus catches Mellie calling attention to herself rather than her president husband and he pulls her aside. He reminds her that the rule is that everything is about Fitz not her. He tells her that she is a cut throat political force but he is a monster and not to cross him. For once, Mellie seems intimidated and shuts her mouth.

David’s first order of business is to expose Reston’s secrets surrounding the shooting. The governor is about to take the fall when his wife steps up. She refuses to let him be arrested, instead she’ll tell the truth and that will exonerate him.

Liv preps Reston for one last conference in front of the press. The real one where he explains what really happened when he walked in on his wife. Ironically, after its over Reston tips his hand and lets Olivia know that the whole thing kind of was premeditated after all. He feels like he just won, big time.

Tonight’s show wraps up with another round table discussion about David and they decide that if he doesn’t back off it’ll be time to take drastic actions. Olivia eavesdrops on a conversation between Abby and David. She brings him info that part of the conspiracy involves voting machines. Liv is determined to take care of Abby herself. Tune in next week to see how she intends to do that!