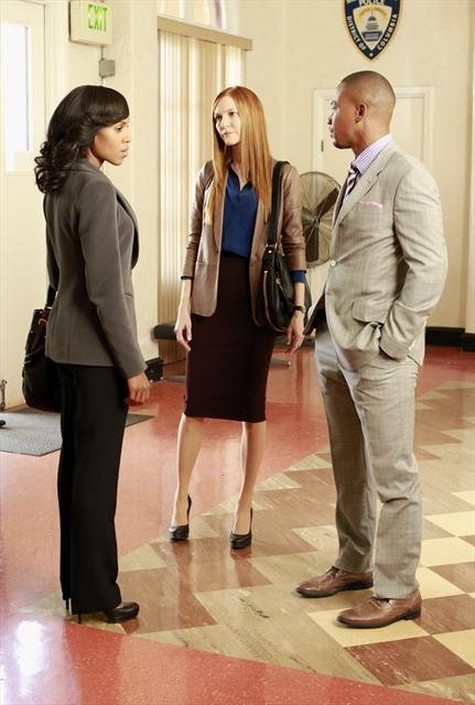 Tonight on ABC is a whole new episode of SCANDAL called “Beltway Unbuckled.” On tonight’s show Top secrets in the beltway begin to unravel. A DC college student goes missing and her grieving parents come to Pope & Associates for help. Did you miss last week’s premiere episode? We watched it and we recapped it here for you!

On last week’s show called “Hunting Season” a paranoid government official droped a bombshell on Pope & Associates and even Olivia is caught off-guard with how high up this Scandal went. Back at the office, unresolved questions about Quinn’s background created tension amongst the associates. Meanwhile, despite Cyrus’ best efforts to keep a lovesick President under control, things still managed to heat up between Fitz and Olivia when Olivia’s old flame returns.

On tonight’s show a DC college student goes missing and her grieving parents come to Pope & Associates for help. Meanwhile David is still investigating the Cytron case and gets help from a very surprising source; and in the White House, Fitz feels the pressure as Mellie proves once again that she’s a political powerhouse.

Tonight’s episode looks like it is going to be a great episode and you won’t want to miss it, so be sure to tune in for our live coverage of ABC’s “Scandal” Season 2 episode 4 at 10 PM EST! While you wait for our recap hit the comments and let us know what you think of Scandal Season 2, so far?

Tonight’s episode starts with Fitz attempting to sleep on the couch in the nursery when Mellie storms in, lambasting him as usual. She basically doesn’t want him sleeping anywhere in the country let alone, in HER White House.  Meanwhile, Olivia and her associates take on a case involving a missing girl named Jenny. As it turns out Jenny is not the typical good girl gone missing. Instead she has been hob knobbing with politicians and documenting her flings with them on a scandalous blog.  Liv gets two leads, there’s a girl in a hospital in Rhode Island and one dead in the park. The dead one turns out to be Jenny, identified by her ankle bracelet with a cross on it.

Huck really does his footwork and hacks into Jenny’s blog. She was at a State Department dinner and he can’t imagine what a 19-year old was doing on the list. Mellie has to shoot a PSA about child immunizations and when a baby throws up on her she flips out so badly that Fitz is summoned to try to comfort his pregnant ball and chain.

After the autopsy on Jenny is completed Liv is informed that she laid facedown in a ditch suffocation for five hours before she actually died. They run a few names in the system,  and come up with Alexander Lavitch, who drives the car Jenni was seen in and IS on her blog list. The problem is he has diplomatic immunity. That is a situation that can only Fitz can fix.

Liv gets nowhere with Fitz but realizes that if the parents make a public plea to have the president over turn Lavitch’s immunity then maybe the public will get in their corner and apply pressure. David and Abby have been hooking up. He is supposedly using her for info but seems to actually like her a bit. As he is meeting to pass on a bit of info we see her double crossing him and sneaking into his apartment where she discovers THE wall. It is covered with hundreds of photos of Olivia. Creepy dude.

Mellie calls Olivia and actually offers to help with her crusade to have Lavitch’s immunity overturned. She believes that if the First Lady jumps on board it will really crank up the heat. It’s a proposition that absolutely stuns Liv.  Mellie goes out onto the front lawn where people are protesting and she refuses to talk, simply states that she’s not there as the First Lady, but as a mom.  Fitz is stunned that the two women in his life that affect him the most worked together- and won.

Olivia is summoned to a restaurant to meet with Cyrus and is instead greeted by Fitz. He tells her that he tried to get Lavitch charged and failed, the best he can do is have him deported. He also asks her to hitch a ride on Air Force One with him. When she asks what possible future they can have besides joining the mile high club, he agrees. He tells her he’s going to do what she wants, he’s going to finally let her go. He’ll go back and be the married father who is also leader of the country. He walks out as Liv crumbles.

Liv identifies with the young girls that come to Washington and find themselves involved with a powerful man. They think they’ll be able to change the world and they all end up hurt instead.

Jenny’s parents are in their hotel room watching the news and they see on the news that Lavitch was found dead in his hotel room. At the same time Huck is at an AA meeting talking about how he just wrapped up a horrible bender that reminded him of the man he once was.  David tells Abby that from what he has uncovered the conspiracy goes way up the chain of command and the show wraps with Cyrus, Vera, Olivia and Mellie all sitting around a table to discuss David’s findings!