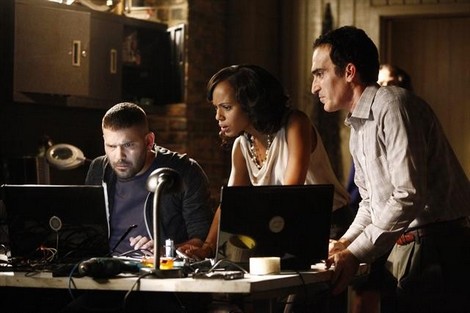 Tonight on ABC is a whole new episode of Scandal called “Hunting Season.” On tonight’s show a paranoid government official drops a bombshell on Pope & Associates and even Olivia is caught off-guard with how high up this Scandal goes. Back at the office, unresolved questions about Quinn’s background create tension amongst the associates. Did you miss last week’s premiere episode? We watched it and we recapped it here for you!

On last week’s show when a public figure is caught in a compromising position, Olivia and her team had do some heavy lifting, literally, in order to clean up the mess. But Olivia was still dealing with the ramifications of the judge’s jaw-dropping verdict, and Abby continued to push for answers. In the White House, Cyrus and Fitz were forced to deal with a serious foreign policy emergency.

On tonight’s show called “Hunting Season” a paranoid government official drops a bombshell on Pope & Associates and even Olivia is caught off-guard with how high up this Scandal goes. Back at the office, unresolved questions about Quinn’s background create tension amongst the associates. Meanwhile, despite Cyrus’ best efforts to keep a lovesick President under control, things still manage to heat up between Fitz and Olivia when Olivia’s old flame returns.

Tonight’s episode looks like it is going to be a great episode and you won’t want to miss it, so be sure to tune in for our live coverage of ABC’s “Scandal” Season 2 episode 3 at 10 PM EST! While you wait for our recap hit the comments and let us know what you think of Scandal Season 2, so far?

Tonight’s episode comes flying out of the gate. As Olivia gets into her car in a parking garage she senses someone in the back seat and effectively says enough to convince him to get out of the car. As she drives he screams about how she’s being followed and “they” know all about her late night phone calls from the West Wing with Fitz. Liv literally backs up and opts to listen. Artie continues to fill her and the rest of the staff in on how shady the government is. He told the government his theories on what they’re actually doing and they in turn started to follow him.

Meanwhile back at the White House, a very pregnant Mellie is caught off guard by Fitz putting away baby clothes. They share a simple moment and while things aren’t good between them, some sort of connection exists.

Olivia goes to talk to Artie’s government boss and the woman doesn’t even blink when questioned. Liv realizes he told the truth and calls the office demanding that they hide him and fast because they will kill him otherwise. Artie is quickly tucked into a safe house (with windows) where he shows them Thorne Gate, a computer sister that allows the government to hack into anyone’s life. They type in Cyrus Beene’s name and pull up live footage of him chatting in the West Wing.  The program self destructs and Liv is left to figure out how to help protect Artie. She meets with Senator Davis who is an old flame and attempts to get a bit of information out of him.

It looks like Artie was serious because Monica, who was connected to him, ends up dead in what looks like an obviously staged suicide. As Harris and Abby investigate a little more Fitz demands a meeting with Olivia. He has seen photos of her with Senator Davis and it clearly isn’t sitting well. Fitz freaks out on her demanding to know whether or not she and the Senator are screwing again. The Secret Service agents literally turn their backs on Fitz as he kisses Olivia, until she pulls away and informs him that she isn’t his.

Olivia has come to the conclusion that the only way to protect Artie is to take the Thorn Gate scandal public. While she scrambles to take things to the press Fitz works equally hard to block it. He considers it an act of treason to let the public know that the government has spyware set to spy on the American people. His legal team gets an injunction to block the story from being aired on television but Fitz isn’t cheery when Mellie sits with him at the dinner table.  After dinner she hunts for Tom and Hal and grills them on what’s wrong with her husband.

Meanwhile Olivia is scheming to find a way to air the footage when trouble erupts back at the safe house. It’s filling with smoke and Artie ducks into the bathroom as Huck tries to put it out. Something said to Olivia makes her realize that Artie is setting them all up and the black sedan that is always around is in fact his get away car. We see flashes of Artie purposely letting something burn on the stove to create a diversion. It flashes back to him staging Monica’s death. They realize Artie actually used them to get the encryption and then took off.

Fitz asks Cyrus how he knew about the West Wing phone calls and realizes that Thorn Gate works. Mellie bursts into Fitz’s office furious because of her husbands meeting with Olivia. It’s pretty obvious she has seen the kiss and tells Fitz if he sees his girlfriend away she’ll blow him away.

Huck finds Artie and hits him with a tranquilizer dart, taking him completely down before going to collect the encryption that Artie stole. We wrap up this episode with Liv taking her old flame, Senator Davis on as a new client. Tune in next week for the case of a missing co-ed!