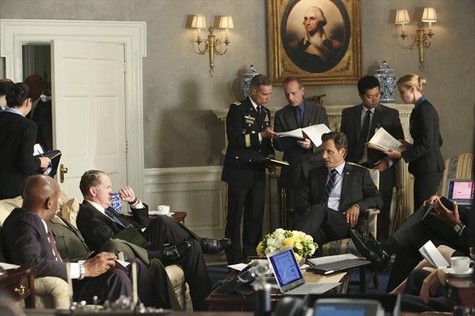 Tonight on ABC is a whole new episode of Scandal called “The Other Women.”  On tonight’s show when a public figure is caught in a compromising position, Olivia and her team must do some heavy lifting, literally, in order to clean up the mess.   Did you miss last week’s premiere episode?  We watched it and we recapped it here for you!

On last week’s show Quinn’s identity was finally revealed, and the more the Pope & Associates team learned about her past, the more they realized she could be their biggest scandal yet.  Meanwhile, a senator seeked Olivia’s help when his personal life was about to become a public disgrace, and President Fitz was stuck between a rock and hard place when Mellie and Cyrus put him in a very compromising position during a live television interview.

On tonight’s show when a public figure is caught in a compromising position, Olivia and her team must do some heavy lifting, literally, in order to clean up the mess. But Olivia is still dealing with the ramifications of the judge’s jaw-dropping verdict, and Abby continues to push for answers. In the White House, Cyrus and Fitz are forced to deal with a serious foreign policy emergency.

Tonight’s episode looks like it is going to be a great episode and you won’t want to miss it, so be sure to tune in for our live coverage of ABC’s “Scandal” Season 2 premiere at 10 PM EST! While you wait for our recap hit the comments and let us know if you are excited to the season premiere of Scandal?  While you wait for the recap check out the sneak peek of tonight’s episode below.

Tonight’s recap:  Tonight’s episode begins with Olivia’s nightly call from the married Fitz. They engage in the usual flirty banter and she asks how his pregnant wife is. He tells her to ask him to stop calling her. When she can’t say it he tells her he’ll call her tomorrow night.

Olivia and her crew are looking for a pastor that has disappeared. They track his phone to a seedy motel where they find him dead on top of a handcuffed hooker. Olivia has to get rid of the situation without the world finding out that this well respected man was a slime ball. They makes him presentable, get him home and then have his wife call the police with the story that he died in his sleep.

The reality is that the pastor had a mistress for 15 years. And she had his son and that should be worth about 6 million dollars in hush money, right? Olivia meets with her to try and get control of the situation and appears to have the upper hand until the little boy walks into the room.

Olivia wants the reverend’s wife, Nancy, to negotiate because this mistress is either going to get money upfront or else she’ll write a book slandering his good name and make the money that way. A deal is eventually struck that begins with 3 million dollars up front.

Mellie comes in to talk to her husband Fitz and he wants to skip over the part where they inevitably fight and skip right to the ending where she storms out. She informs him that one of his favorite role models, the Reverend died of a heart attack and she wanted him to hear it from her rather than on the news. Then she storms out.

Quinn/Lindsay has a momentary meeting with Olivia where she asks point blank why Olivia helped to change her identity. Olivia refuses to give her any information just yet because it’s not time. Lindsay is later reunited with her father.

Harrison and Abby head to the morgue where they find out that the attorney general’s office has ordered a full autopsy on the reverend. Olivia tries to get them to just let it go without needing to provide proof that the death really wasn’t foul play.

Lindsay goes back to the hotel that she woke up in and Olivia has her followed by Huck. He tells her that seven people didn’t die in the bombing, eight did and that she can’t go back to where she came from. Olivia and Fitz have another of those late night bedtime chats and she tells him about Pastor Drake- the full story. She also tells him that the hooker wasn’t a hooker but his mistress that he loved dearly.

Mellie wants to talk to Mrs. Drake before the funeral and of course a cloud of press follows her in. Nancy has taken a sedative and spits out under her breath to Mellie that he was a cheating bastard. Nancy collapses as Mellie totally understands what it is like to be married to a cheater, to be stronger than her husband. Olivia eavesdrops and hears what Mellie is saying and the message she is sending loud and clear.

Abby meets Olivia in the hallway and freaks out because the mistress is no longer agree to the 3 million dollar terms. Olivia has her breakdown with the mistress telling her she understands that what she really wants is 15 more Christmases, to sleep next to the man she loved and to be a part of his legacy. She also wants the opportunity to really say goodbye.

During the funeral procession Nancy actually walks over and grabs her husband’s mistress and child and pulls them into line to walk with her. Driving to the cemetery in the presidential car Mellie begs Fitz to forgive her so at the very least they can be friends again.  He grabs her face and tells her that she’s forgiven then goes back to reading his papers as she looks absolutely stunned. It’s also the kind of night where Olivia isn’t taking Fitz’s phone call. Flash to the next morning and Olivia is talking to Myrna who tells her that Lindsay could bring down the entire government. You’ll have to tune in next week to find out why!