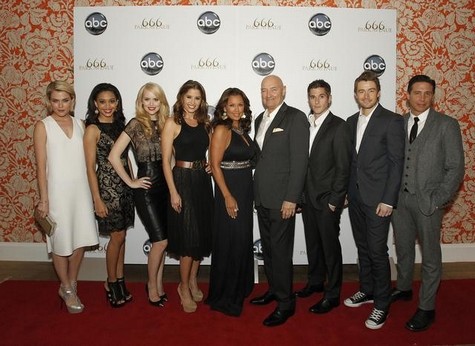 Tonight on ABC their new drama 666 Park Avenue airs with its pilot episode.  As the title might suggest, Vanessa Williams shares her new TV residence with evil.  Vanessa said about the show, “It’s a cross between The Shining, Rosemary’s Baby and Devil’s advocate.”  Vanessa co-stars with Lost’s Terry O’Quinn as the owner of the Drake, an upscale but creepy Manhatten Apartment building where residence move in, but they cannot break out.

Dave Annable and Rachel Taylor play the Drake’s new managers, who might be onto the reason some residents don’t last too long.  Executive Producer Mathew Miller said, “We are going to focus on what it means to live in that building and have dreams granted.”

What would you do to have everything you desire? Step inside “666 Park Avenue,” New York’s most seductive address. We all have some burning need, desire and ambition. For the residents of The Drake, the premier apartment building on Manhattan’s Upper East Side, these will all be met – for a price – courtesy of the building’s mysterious owner, Gavin Doran. But be careful what you wish for, because the price you may pay is your soul.

On tonight’s premiere episode, “Pilot,” when Jane Van Veen (Rachael Taylor) and Henry Martin (Dave Annable), an idealistic young couple from the Midwest, arrive in New York City, the glamorous center of industry and media, they are offered the opportunity to manage the historic Drake by its wealthy owners, Gavin (Terry O’Quinn) and Olivia Duran (Vanessa Williams) – and the seduction begins. Jane, a small town girl with big ambitions, always knew she wanted to be an architect. Henry, a member of the Mayor’s staff, is grounded, intelligent and tenacious.

They are lured by the intoxicating lifestyle of New York’s wealthy elite. But they soon wonder what they’ve gotten themselves into when they unwittingly bump into the dark embrace of the building’s mysterious supernatural forces which endanger the lives of their residents.

Tonight’s recap: First we are at the symphony and then we see a man  running in and apartment with a case in the case is a violin which he smashes and he grabs a suitcase and tries to run out as he runs out all the doors at the hotel slam clothes.

As he runs out the phone rings and it is a voice that says, “hard to say it has been 10 years Mr. Hardwell.”  He tells him that what he thinks about a violinist that wanted to be the best.  The man asks for one more year and the man on the other end of the phone tells him he signed a binding contract.

The man tries to get out the door and finally gets out and says, “Thank you!”  a hole in the door opens and he gets pushed back in 999 Park Avenue or 666 Park Avenue as the shadow shows.

A young couple gets out of a cab at 999 Park Avenue and the women, Jane Van Deen knows the place it was in Architectural Digest.  Jane and Henry martin and they want to see Mr. Doran and have to sign in, they are there for an interview.

Henry and Jane are there for an interview for a manager position and they meet Olivia Doran. She takes them too see Gavin Doran.  He tells them about the job.  Janes tells him they were looking for a new apartment when they saw their add.  Henry use to work for the mayor and Jane is not working.  He tells them to be blunt he is not in the charity business he is looking for people who know what they were doing.  Jane asks Gavin  when did they have the building retrofitted.  Gavin is surprised how she knew that and they tell him she is an architectural expert.

They don’t understand why the previous manger left.  He gives them their keys.  They are totally impressed with the place.  Olivia and Gavin talk about how nice the girl is.  Gavin tells her that is how they get Henry.

Bryan, a play-write, comes into his apartment and his wife, Louise tells him she needs him to go out and get a few things.  He tells her he met the new manager.  A couple about their age.  Meanwhile, Bryan is spying on the neighbor changing her clothes.  A Peeping Tom.

Jane and Henry are moving their thing in.  A man comes in the garage John Barlow and he is cut, he is another member of the apartment building.  Jane tells Henry it was weird the man was covered with blood and she is a bit freaked out.

Meanwhile John, the man covered with blood is at his apartment cleaning himself off and the bleeding is not stopping.  He says, “Please forgive me!”

Jane tells Gavin he met John.  Gavin tells her John was an accountant and his wife died recently.  Olivia comes in and tells Gavin their friends cancelled and they would like to invite Jane and Henry to a black tie affair and the symphony.  Jane agrees to go.  Olivia compliments Jane on her necklace.  Jane calls Henry and tells him about it.

Jane is making her rounds looking a the building and the elevator opens and it is Nona.  She tells Jane there is a thief in the building stealing small things, she also mentions a washer is broken.  She compliments Jane’s necklace.  Jane heads down to the laundry room.  The light in the room is flashing and Jane tries to fix it.  She finally gets it fixed.

She notices a design on the floor and starts moving boxes to see it.  When she sees the design she says, “OMG!”

Gavin gets home and Jane is in the bathtub she tells Henry she found something cool in the basement.  She tells him it was a dragon in the floor.  Henry suggests she tell Gavin, but Jane does not want too.  Jane is hoping she can convince him to preserve some of the Drake.

Gavin calls John and he asks how John is doing.  John tells him it is in the paper and Gavin promised to bring his wife back.  Gavin tells him they made a deal and he tells John to check his bedroom.  There is a women sitting on the bed and John says to the women, “Mary, You came back to me.”

Louise, Byran’s wife is pissed because her assistant quit.  Byran tells her to calm down he will help.  He goes back to his play he is writing but so far he has only got the name and is name done.

Daniel comes to see Gavin because he short sold something.  Gavin tells Daniel he knows he is over-leveraged and he can help.  Daniel tells him he would rather go bankrupt.  Daniel tells Henry he should have better friends.

Henry overhears the conversation Daniel and Gavin were having and he tells Gavin he cannot talk about what they were talking about because he works for the Mayor.

Olivia tells Jane while they are dress shopping she had a daughter who dies in a car accident.  Jane sees the price and tells Olivia she cannot afford the dress and Olivia becomes offended and leaves her there.

Bryan comes back to the apartment and Louise tells him she hired an assistant it is Alexa the women that Bryan has peeping at through her window.

Jane is doing research on The Drake.

John and his wife Mary are out reminiscing.  Mary feels cold and she asks John what is happening.  John tells Mary that Gavin will know.  John calls Gavin and he tells him there is only one way to cheat death.  John asks if he has to hurt someone, Gavin promised it would be only one.  Gavin tells him there is a paper under his door and he has to do it or Mary will die and so will John.

Henry tells Jane she has 30 minutes to get dressed.

Jane finds out who the dragon on the floor belongs too.  It seems in 1920 there was an order of the Dragons.  The strange thing is when she compares the picture of the floor in the picture she found there was a door and now the door has been cemented up.  They both wonder why.

Jane goes to get dressed and notices a box at the door it is from Olivia it is the expensive dress that Olivia and Jane saw when they were shopping.  Jane and Henry walk in the party and Gavin says to Olivia, well done.

Meanwhile Bryan is still peeping at Alexis and she knows it she strips off looking at him.  Bryan and his wife get in the elevator and Bryan asks how she found Alexis.  The elevator stops at their floor and it slams shut on Louise.  It starts to go back up with her sticking out.  Bryan saves her, but she is hurt, they call an ambulance.

Jane and Henry are at the symphony.  While they are there Nona is stealing Jane’s necklace she is the theif.

Meanwhile John is following someone with a knife and goes to attack him but cannot.  He comes back to his wife and apologizes and tells her he is sorry he just could not do it again.

Sitting at the symphony Jane starts getting creeped out and turns around and Gavin is sitting behind her.

Henry and Jane are balk at The Drake and she asks him to unzip her, she gets a bit freaked out.  She tells Henry at the concert Gavin gave her a look and it was weird.  Henry tells her she had a couple of drinks tonight and getting the job things lots happened this week.  Jane is looking weird and she asks Henry, “Are we going to be okay here?”

John wakes up and Gavin is sitting there.  He tells John he disappointed him and Mary has gone back to where she belongs.  John tells him it is not right what he does.  Gavin tells him he fills needs and John did not do what he had to do and now it is time to settle up.  On the wall above the bed hands start to come up and John is taken towards the wall and the hands take him in and he is gone.

Jane wakes up and asks Henry if he heard something.  Jane goes out in the hall and says hello, and she goes into the staircase and gets locked in.  She starts to call for Henry, anyone.  She looks down the staircase and sees someone going down (a hand of the person) and she says hello but the person does not answer.  She gets out of the staircase and into a room and the same dragon design is on the floor and this time there is a door in the back.  She walks toward the door and it takes her to a terrace and there is a women walking and the women gets up on the ledge.  Jane recognizes the women as Mrs. Barlow and she says to Jane, “You should never have came here, they are never going to let you go.”

Jane and Henry are getting their contracts and Gavin tells Emma he wants her to look over the plans for the Drake to make sure it is done correctly.  Jane is thrilled and they sign the contracts.

Nona is looking at Jane’s necklace she stole and she has a premonition of Jane running in her new red dress and someone with a hatchet.