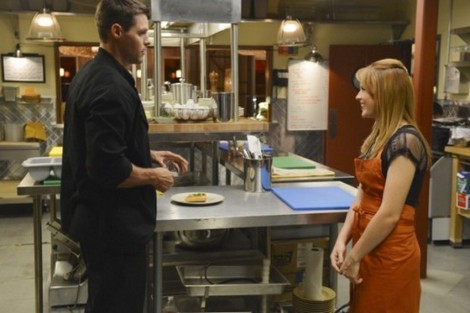 Tonight is an all new episode of ABC’s Award Winning series Switched At Birth. On tonight’s show called ‘The Shock of Being Seen’ after a disaster in the kitchen at work, Daphne begins to bond with her new boss.  If you missed last week’s episode called “The Intruder” you can find out full and detailed recap here!

On last week’s show Regina and Angelo faced repercussions from their marriage, Meanwhile, Bay mets a fellow street artist; Daphne and Emmett entered their Zombie movie in a film festival; and John’s baseball record was in jeopardy of being broken.

On tonight’s show Daphne begins to bond with her new boss.  Her new boss, Chef Jeff, asks her to stay late one night. Meanwhile, Bay uses Angelo as her excuse to get around John’s rules. And Kathryn is upset when Regina gets all of the attention in her interview for the new book.

Meanwhile last week the cast went all out to celebrate their hit show Switched at Birth and the launch of the accompanying book, Switched at Birth: The True Story of a Mother’s Journey at the Redbury in Hollywood on Thursday.

The book, written by Thompson’s character Kathryn Kennish, furthers the series by detailing the inside story of her experiences as a mom of her child who was switched at birth from the big reveal of the switch to the aftermath.  To check out all the photos of the launch go here!

Tonight’s recap:  Tonight’s show opens with Bay running into a group of fellow street artists. She met the girl tagger of the group on the last episode and asks if she can help with what they’re working on. The answer is no but her new pal tells her that she’ll text her in a few days and she can work on the next project- if she can handle it.

Daphne causes another crash at work, literally. She heads to the walk in freezer and a shelf collapses on her. She apologizes emphatically to Chef Jeff who seems to have warmed nicely to her. So much so that he stays late with her to help her fix the pastries that were ruined in the crash.

John receives a phone call regarding Bay and the fact that she’s now on academic probation. She doesn’t care much about homework because she’s heading to art school after high school, a plan neither parent seems to approve of much. They also don’t approve of her bio dad, Angelo, offering to help with her French homework.

Daphne and Bay forge a new partnership, one that helps each other. Daphne is guiding Bay through geometry and Bay is helping Daphne to transform into a sluttier version of herself. Meaning, Daphne gets ready for work wearing a see through, mid driff baring shirt.

Kathryn and Regina both decide to do a sit down interview in order to help promote Kathryn’s new book but there’s a huge problem almost immediately. The interviewer is friends with Kathryn, but far more interested in what Regina has to say. The blood between these women already isn’t great so this uncomfortable situation certainly won’t help things.

Bay bops from watching a French film with Angelo to getting out the door to go and work with her newfound friends.  Bay lies to John about going to a café, Frenchie style, to finish her homework. It’s an Angelo-approved move that no doubt is going to cause all kinds of problems sooner rather than later.

Daphne shows up for work in her slut gear and definitely catches Chef Jeff’s eye. He asks if she has plans after work and she (of course) offers to stay late. He says okay and walks away looking a bit jangled.

Basically chef Jeff just steadies himself and then circles back to officially ask her to stay.

Angelo realizes that letting Bay was a mistake and decides to clue John in to the fact that he let her go to meet a friend. Angelo can’t get in touch with her so he comes clean. John flips out and explains that it is also Angelo’s job to protect her rather than to be her partner in crime. Angelo is frantic when John says that all they can do is sit and wait.

The fallout from the interview weighs heavily on Kathryn. She melts down with Regina and is crushed over the fact that she never realized that Bay wasn’t her biological daughter. It took Regina coming forward for her to notice that something was off. Meanwhile at the Kennish’s Bay strolls in and gets ambushed by both of her fathers. John tells her that everyone has turned their life upside down so that Angelo can be apart of her life and instead of appreciating it, she has used him as her latest alibi.

Daphne gets exactly what she wanted, after hours time with Chef Jeff. He tells her she’s off dish washing and now on salad duty. He then cracks out the booze, but not for the two of them. Instead he takes his bottle of booze and leaves for what appears to be a date leaving Daphne looking foolish.

Bay finished her French project and offers to show it to John just as he gets a phone calling saying there is something wrong at the car wash that needs to be investigated. She offers to show it to him there. They roll up and it’s obvious the graffiti at the car wash was done by Bay. Her dad vilifies the person who made the mess and makes her paint over it.  Tune in next week to see the fallout between Bay and John.